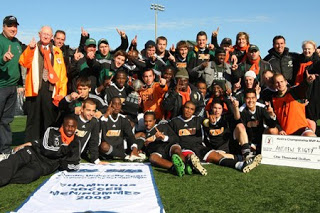 Hero to Goat in 60 Seconds: The Curious Case of Jimmy Mayaleh
Two weekends ago I covered the AUS Men’s Soccer championships at Dalhousie University for ssncanada.ca. It was certainly one of the most bizarre yet beautiful championship weekends I had ever been associated with.
The three day event was chalk full of upsets, individual flashes of brilliance, contentious altercations between players and fans, and of course, a classic Halifax weekend of weather that forced the postponement of games and brought freezing cold temperatures to the pitch once play finally got started.
On quarter final Saturday, only one goal was scored through 2 games, a brilliant header by the magical Olivier Babineau in the closing minutes of overtime during game one, giving Moncton an upset win over UNB. In the second game, Danny Mcalleer won the match for PEI in penalty shots, after Saint Francis Xavier’s outstanding rookie, Max Mound, saw his attempt go harmlessly wide of the right post. If you watched the game on ssncanada, you could hear the shivering and shallow breathing of me and Matt Fegan as we called the last hour of the game in freezing temperatures.
On semi final Sunday, the four teams combined for 14 goals, both contests finishing with a 4-3 score. In the opener, Cape Breton scored 4 goals in the first half, and then had to hold on as Cinderella Moncton made a late charge to draw within 1 goal, but could not get the equalizer. In the day’s finale, last year’s AUS champion Dalhousie Tigers were upset on their home pitch by the upstart PEI Panthers. Jerrod Murphy and Jimmy Mayaleh played brilliantly in leading UPEI to the stunning win over the heavily favoured Tigers.
The final was played Monday morning on a beautiful, sunny day in Halifax. Cape Breton held a 1 goal lead well into the final minutes, when Jimmy Mayaleh found open space for the first time in the match, and drilled a strike past the Cape Breton keeper to tie the game at one.
Charlottetown’s Mayaleh was an instant hero for his hometown school, and to celebrate he ran around the field while removing his jersey. This earned him an automatic yellow card, seemingly an easy price to pay for the amount of joy the underdog Panthers felt as they drew even with the mighty Capers.
However just seconds after Cape Breton kicked off, Mayaleh let loose with a vicious and unnecessary challenge at midfield that drew another yellow card, earning Mayaleh an ejection from the match.
Mayaleh walked off the pitch looking like a man desperate for a hole to crawl in. The same turf that, just 1 minute previous, he had been dancing around minus his shirt, celebrating the goal of the tournament. Down to 10 men, the Panthers would go on to lose to the Capers, Keishon Bean scoring the game winning goal just 20 seconds into the first overtime to give Cape Breton an AUS Championship.
As a result of the red card, Mayaleh was forced to miss the team’s opening match at nationals this past weekend vs Laval, a match the Panthers would lose 3-1.
One of the great things about watching college and university athletes is the constant balance between incredible feats of performance and mind boggling mistakes of innocence. These athletes do things that make you jump out of your seat and simply marvel at the level of performance they can obtain. They also make mistakes, usually a result of the immensity of the moment that can simply break your heart. That’s when you step back, take a moment, and remind yourself: they’re just kids.

AUS Notes and Observations
The Dalhousie Tigers Men’s basketball team is very legitimate. I covered the Tiger’s games this past weekend vs. Memorial. Although the Tigers were inconsistent against the scrappy Seahawks, the disparity in talent levels between the two teams was very evident. Simon Farine is looking like the best player in the AUS, while newcomers Joe Schow and Mari Peoples-Wong showed flashed of brilliance in both games. Schow gives the Tigers the first legitimate big man in the John Campbell era, while Mari Peoples Wong may be the most athletic player in Tigers history…….I chatted with Scott Munro, head coach of SMU Huskies basketball on Sunday. The coach seems very happy with his Huskies team thus far. First year guard Justine Colley is as good as advertised and Laure Pitifield has brought alot of experience and offence to a Huskies team that was desperate for a presence in the post……The AUS Men’s Volleyball conference will be business as usual for the Dalhousie Tigers. Memorial is still a bad team while UNB does not appear to be much better than last season’s 8-10 effort. The Tigers swept the Reds fairly easily in weekend action at the Dalplex. The Reds actually hung close on Friday but were dismissed quickly in straight sets on Saturday…….Can’t wait for the Uteck Bowl. Dream match up for Huskies fans; the return of Blake Nill and Eric Glavic. The Huskies will have Devon Jones for the game, still no word on his brother Tristan. I had an interview with placekicker Justin Palardy on Friday’s episode of Haligonia Sports http://live.haligonia.ca/halifax-ns/sports/6276-haligonia-sports-episode-18-.html…….. April Scott is back. I was covering the women’s volleyball game at Dalplex on Saturday for ssncanada when I looked down and saw April Scott walking around in a Tiger’s basketball uniform. I literally rubbed my eyes. AUS coaches must feel like Scott has unlimited eligibility. The 5th year senior is taking Dental Hygiene at Dal and decided mid week to dress up for the Tigers after taking last season off. Scott’s presence in the backcourt is a godsend for Coach Anna Stammburger as she has been playing rookies Trish Mcneil and Anna Von Maltzahn along with senior Rachel Harrison. The combination had been getting killed by full court pressure but Scott brings the type of ball control and smarts that makes everybody on the team better. 5th year posts Laura and Leah Girdwood got multiple easy baskets all weekend with Scott in the line-up, while Harrison was arguably the Tigers best player. The return of Scott paid immediate dividends, as the Tigers claimed their first victory of the season on Sunday vs. a tough Memorial Seahawks squad….This weekend I’ll be covering the Dalhousie Tiger’s men’s hockey game vs Acadia on Friday night at 7:00 on ssncanada.ca. Also tune in to CKDU Sports Tuesday at 10:30 am on CKDU 88.1 or ckdu.ca, and I’ll have a special Uteck Bowl preview show on Friday’s Haligonia Sports with Coach John Mcneil of Eastlink. The show airs Friday at noon on haligonia.ca.