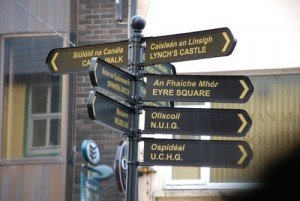 If there’s one thing that Ireland has plenty of it’s castles in various states of disrepair. Well, besides pubs that is. Williamstown, where we were staying for a few nights, has a population of 400 and four pubs on main thoroughfare. Based on this scenario I figure there’s a requirement that a pub be open for every 100 people. But, I could be wrong.

I think it goes without saying that while in Ireland we took a number of day trips that involved both castles and pubs. Highlights from the area include Roscommon Castle and Athenry Castle.

If you’re not already aware of it, there’s an Irish song called “The Fields of Athenry” which, when sung by your musically inclined Newfoundlander brother-in-law, gives you pause for thought about the lives that passed through the lush greenery and now ruined fortresses of old:

It was an amazing opportunity, standing among the crumbling castle walls and thinking about all the moments that are forever lost in time. Truthfully, I think you’d be hard-pressed to drive down any road in the area without seeing the remains of some ancient building.

Even today, modern castles continue to be built in the form of grandiose mansions. In the outskirts of Galway, residents have erected massive houses (even by North American standards) with all the trappings of high income flamboyance: brick walls and wrought-iron gates, paved driveways and lots of property to boot.

Cokebaby and I spoke at length with a tour guide at one of the castles who had great stories to tell (not just of the castle we were touring) and he made a number of interesting points. The history of the Gaelic speaking population in Ireland is much like that of any displaced peoples and it’s only through years of struggle that the language is now being embraced again. He also mentioned the housing trend that we saw and noted: People used to have small houses with big families and now they have big houses with no families. He likened these mansions to living mausoleums. 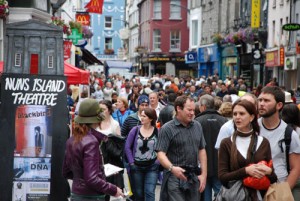 It turns out a good deal of people commute to and from Galway to rural areas like Williamstown. As a result, we were amply warned to not travel during rush hour. We did however, take an afternoon off from the ancient sites to stop in to the city for a shopping excursion where most of our souvenirs were purchased along with a few nice items for ourselves. Even though it was the middle of summer, I walked out of the city with two wool items: a shawl/sweater and a scarf.

Overall, this area of the country had a little of everything from rural pubs to city shops to historic sites. Really, just something for everyone which was exactly what we needed for a group as large and as diverse as ours.

Up next: Stepping back in time to the living history village of Craggaunowen where I should have picked up that pamphlet on hand-to-hand combat in preparation for our stay in a city that all the tour books failed to point out had the nickname of “stab city.”