After spending several days in the quaint town of Williamstown in a great B&B, connecting with locals who actually knew Cokebaby’s family, it was time to move on to another area of Ireland.

En route to our next accommodations we stopped in to check out The Craggaunowen Project. Now, there are plenty of living history park examples in Canada. Black Creek Pioneer Village in Toronto (showcasing life in early Ontario) and the Fortress of Louisbourg in Cape Breton, Nova Scotia (the largest reconstructed 18th-century French fortified town in North America) are among the ones I’ve visited.

Should I have prefaced that with a “nerd alert”? 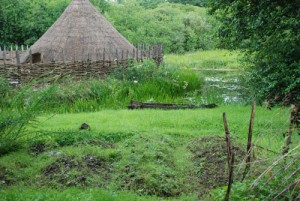 A view from outside the walls

Nonetheless, I found Craggaunowen to be one of the more interesting spots we visited while in Ireland. Because it was raining, most of the costumed “locals” (i.e. high school drama students) decided to duck out so we were left to wander the wooded pathways and scenic recreations on our own. There was one exception: a young woman at a spinning wheel who knew all manner of things about dyes. For example, back in the days of yore there was a berry with purple juice used as dye to create orange through oxidization. Cool, right?

There were also wild animals (behind fences) like sheep and wild boars. And a ring fort. And a replica sailing vessel that was used to actually sail to Newfoundland. And for the tourist in every traveller Craggaunowen had one of the best, if not smallest, gift shops we’d come across. Definitely one of the more relaxing, fun and educational highlights of the trip for me.

Moving right along though, our next hub that we’d use as a base of operations for our day trips was Limerick.

Did you know that Limerick has earned the nickname of “stab city” by the rest of Ireland? No? Neither did I. Until a few weeks ago, that is.

Rick Steves (whose books I happen to like very much despite the really horrid hand-drawn maps) didn’t even bother listing it as a place of interest despite there being a number of castles in the vicinity; for future reference, not being listed in a reputable guide book might mean any number of things but sometimes it doesn’t just mean “off the beaten track.”

One night while walking toward a pub by the water, where I had my sights on oysters, we noticed the area was starting to look sketchy with boarded up windows and graffiti. That’s when an even sketchier looking man walking at a quick pace toward us. Then, all of a sudden, a lead freaking pipe falls out of his pants! I guess it’s kind of embarrassing for that kind of thing to happen to a hoodlum so he just kind of picked up his belonging and scampered off.

It was later that night, after ample warnings otherwise, that Cokebaby’s brother-in-law ventured off on his own. He came back telling tales of almost being egged by kids hollering out a window and then subsequently being chased down the street by another group of young hooligans.

After that point, we stayed within the one-block parameter of our hotel, which was also close to the Garda (Police) Station. Even still, when we went to a bar the next night, Cokebaby and his brother ordered a pint each and a half-pint each for the ladies, sat down, and quietly advised us to drink quickly due to the crowd of skids at the bar who had made some loud, skiddy remarks.

One morning, Cokebaby got into the car and a spider had built a web in front of his seat. Even the arachnids were hardcore!

I wound up partially rewriting a Guns N’ Roses song that got stuck in my head during this leg of the trip:

[Don’t] take me down to the scene of stab city
Where the thugs are mean and the crimes aren’t petty
Take me home (Oh, won’t you please take me home?!?!)

Overall, the experience in Limerick certainly wasn’t the highlight of the trip. To do it again, we’d probably rethink even just using the city as a place to sleep because of the whole going out after dark thing. But maybe we just had a rash of coincidentally unpleasant experiences in the few nights we were visiting…right?

Coming up next week: Getting the hell out of Dodge. But first, some more sites. Then we head to the bustling city of Dublin and the mysteries of Newgrange.

Living history versus the history of living
https://haligonia.ca/living-history-versus-the-history-of-living-4550/