I was recently a guest on CBC Radio One’s Information Morning, along with Lisa Doucette, manager of Woozles Children’s Bookstore, to talk about recent children’s books. 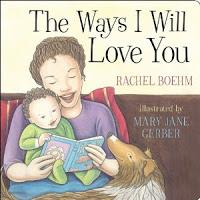 Here are my holiday reading suggestions for youth- and those young at heart:

The Ways I Will Love You, by Rachel Boehm, illustrated by Mary Jane Gerber. A charming board book reciting all the ways a mother will share her love, care and fun with her baby, using a rhythmic, rhyming text, perfect for reading aloud.
(For babies /toddlers)

Knuffle Bunny Free, by Mo Willems, is the third and perhaps final installment of the Knuffle Bunny series. This time, beloved stuffed rabbit Knuffle Bunny is left behind on a plane during a trip to Holland to visit young Trixie’s grandparents. Trixie struggles to enjoy her visit without her toy, realizing that she is “getting bigger”, and in the end, after miraculously re-uniting with Knuffle Bunny, she gives him to an upset baby on the plane home, much to the relief of her fellow passengers and the amazement of her parents. Fans of Toy Story 3 will love this book.
(For preschoolers)

Chester, the naughty, know-it-all, take-charge cat, from author Melanie Watt’s two previous books in the series of the same name, is causing havoc again in Chester’s Masterpiece. This time, Chester has stolen Melanie’s art supplies and computer mouse, and plans to take over the writing of this book himself. Melanie is reduced to pleading with him using post-it notes and a pencil, and eventually guides him through the elements of story writing.
(For early readers)

Bink & Gollie, by Kate DiCamillo and Alison McGhee, illustrated by Tony Fucile. This early chapter books is in the tradition of classic mis-matched friends like Bert and Ernie or George and Martha, who, despite their differences in personality, have a strong bond of friendship. Kate DiCamillo’s trademark poetic sensibilities offer unexpected language here, and Fucile’s drawings add humour (Bink’s hair is almost a character in itself!)
(For early readers)

Pit Pony, by Joyce Barkhouse. Eleven year-old Willie is forced work in a Cape Breton coal mine to prevent his family from being evicted after an accident injures his father and older brother. He becomes attached to Jem, a Sable Island pony who was also forced to work in the mine, hauling coal carts. Set in the early 20th century, this historical novel will be an eye-opener to youngsters, with its themes of loyalty, close-knit communities and a hard life with very few options for working-class people.
(For middle readers)

The Last Loon, by Rebecca Upjohn. Evan is resentful when he is sent to spend his Christmas holidays with his Aunt Mag in the northern Ontario wilderness. He is incredulous that everyone around him is making such a fuss about a big bird that is hanging around the lake – “What’s the big deal?” But, as time passes, Evan makes friends and learns that the loon may die if the ice starts closing in on it, he becomes concerned about its welfare, and then takes some dangerous risks in order to save it.
(For middle readers)