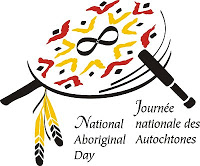 June 21st is National Aboriginal Day in Canada. First proclaimed in 1996, this a day for Canadians to celebrate the culture and heritage of our First Nations, Métis and Inuit people.
In honour of this exciting day, I offer up four recent novels by four of our contemporary Aboriginal authors.
Wings of Glass (M)
by AmberLee Kolson

“For years, the unnamed heroine of Wings of Glass has pushed the past aside, but a mutiny has begun. She finds herself being sabotaged. It would be easy to defend against her saboteurs if only she could see them. But she can’t. They are in her mind. They are her memories and they threaten to kill her if she allows them to slip past the finely woven barriers of defense she has created to repress them. Fortunately, she has come up with a plan to outwit them. She plans to commit suicide. If only she could find the time. Set in modern-day Edmonton, Wings of Glass follows one busy wife and mother as she tries to overcome the demons from her past.” -publisher
Indian Horse: a novel (M)
by Richard Wagamese

“A magical new novel from the bestselling author of One Native Life (M).
Saul Indian Horse is dying. Tucked away in a hospice high above the clash and clang of a big city, he embarks on a marvellous journey of imagination back through the life he led as a northern Ojibway, with all its sorrows and joys.
With compassion and insight, author Richard Wagamese traces through his fictional characters the decline of a culture and a cultural way. For Saul, taken forcibly from the land and his family when he’s sent to residential school, salvation comes for a while through his incredible gifts as a hockey player. But in the harsh realities of 1960s Canada, he battles obdurate racism and the spirit-destroying effects of cultural alienation and displacement.
Indian Horse unfolds against the bleak loveliness of northern Ontario, all rock, marsh, bog and cedar. Wagamese writes with a spare beauty, penetrating the heart of a remarkable Ojibway man. Drawing on his great-grandfather’s mystical gift of vision, Saul Indian Horse comes to recognize the influence of everyday magic on his own life. In this wise and moving novel, Richard Wagamese shares that gift of magic with readers as well.” – publisher
Nobody Cries at Bingo (M)
by Dawn Dumont

“In ‘Nobody Cries At Bingo’, the narrator, Dawn, invites the reader to witness first hand Dumont family life on the Okanese First Nation. Beyond the sterotypes and clichés of Rez dogs, drinking, and bingos, the story of a girl who loved to read begins to unfold. It is her hopes, dreams, and indomitable humour that lay bear the beauty and love within her family. It is her unerring eye that reveals the great bond of family expressed in the actions and affections of her sisters, aunties, uncles, brothers, cousins, nieces, nephews, and ultimately her ancestors.
It’s all here — life on the Rez in rich technicolour — as Dawn emerges from home life, through school life, and into the promise of a great future. ‘Nobody Cries At Bingo’ is a book that embraces cultural differences and does it with the great traditional medicine of laughter.” – publisher
Fall From Grace (M)
by Wayne Arthurson

“The story of a man who had everything, lost it all, and is trying to get it back. Leo Desroches doesn’t look like a native, but his mother was Cree, and he understands the problems of indigenous Canadians of the First Nations. Which is probably why the Edmonton newspaper he writes for decides he should be their Aboriginal Issues reporter. He has his own issues to deal with: his compulsive gambling that he couldn’t stop even after it cost him his wife and children; his alcoholism; the risk-taking that threatens to derail him every time he starts to get his life back together.
When he’s assigned to cover the murder of a young native prostitute, it’s just one more story…until the cop in charge lets him view the corpse, something the Edmonton police never do. When Leo writes his article, it starts a chain of events that leads him to discover a much, much bigger story, one that could bring down the entire police department…if it doesn’t get him killed” – publisher