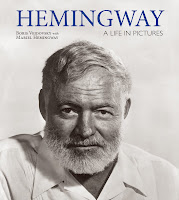 2011 marked the 50th anniversary of Ernest Hemingway’s (M) death. A number of publications appeared to mark the occasion including Hemingway: a life in pictures (M) by Boris Vejdovsky. Together with granddaughter Mariel Hemingway (M), he selected around 350 photographs, some frequently seen and others more intimate, to illustrate Hemingway’s fascinating and action-filled life.
Vejdovsky is a Hemingway scholar and his accompanying text is respectful and gives a balanced view of this complicated man. The book is a bit scattershot, organized thematically rather than chronologically and assumes some familiarity at least with the outline of his life. The photographs are really quite beautiful showing a young Hemingway dressed as a girl, a boyish rascal, a handsome and vigorous young man and finally the white-bearded and care-worn face that became the iconic Hemingway. Scenes from his family life are accompanied by text that illuminate the apparent scenes of domestic harmony. Hemingway was to have a difficult lifelong relationship with his mother, resenting her dominance and resenting his father’s subjugation, modeling himself rather on the manly and adventuresome Theodore Roosevelt. As a young man he cemented his reputation as a leading American writer, a hunter, a fisherman, a drinker and a philanderer.

Last year, as well, saw the publication of the very successful The Paris Wife (M) by Paula McLain speculating this time about Hemingway the husband. Hemingway was to marry four times. Vejdovsky writes that although he had small respect for women, once he married, he seemed to need to be married although never for long to the same woman. By coincidence while reading this book I stumbled across Hemingway and Gellhorn a TV movie released this year starring Nicole Kidman and Clive Owen. I suspect it took some liberties describing his marriages starting with his second marriage to Pauline to the explosive end of his marriage to Martha Gellhorn (M). As always one book leads to another and now I want to find out more about the fascinating Martha Gellhorn in Martha Gellhorn: a life (M) by Caroline Moorehead.

Also published last year was The Letters of Ernest Hemingway: volume 1: 1907-1922 (M) .“With the first publication, in this edition, of all the surviving letters of Ernest Hemingway (1899-1961), readers will for the first time be able to follow the thoughts, ideas and actions of one of the great literary figures of the twentieth century in his own words. This first volume encompasses his youth, his experience in World War I and his arrival in Paris. The letters reveal a more complex person than Hemingway’s tough guy public persona would suggest: devoted son, affectionate brother, infatuated lover, adoring husband, spirited friend and disciplined writer. Unguarded and never intended for publication, the letters record experiences that inspired his art, afford insight into his creative process and express his candid assessments of his own work and that of his contemporaries. The letters present immediate accounts of events and relationships that profoundly shaped his life and work. A detailed introduction, notes, chronology, illustrations and index are included.” publisher