A new espresso bar, Weird Harbour,  is opening in the small space between Urban Outfitters and Barrington Street Steakhouse.

FRED has moved a few blocks north on Agricola and the former FRED space on the corner of North St. has been sold to Pete Luckett. Word is Pete plans to turn the space into a cidery and tasting bar.

Smiling Goat Espresso is adding a 4th location on the corner of Spring Garden and Queen, sharing the space that was Starbucks with Telus (Advantage Wireless). Starbucks recently moved up the street to the corner of Dresden as that Queen property is scheduled to be redeveloped in a couple of years.

Speaking of Starbucks, some Pumpkin Spice Lattes have been spotted in the wild. 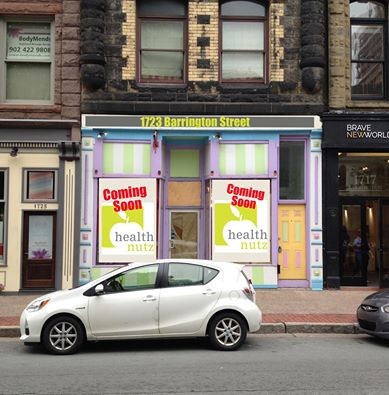 Health Nutz, a new health, and supplements store ironically is opening in the former Freak Lunchbox spot on Barrington (Freak moved a couple of doors to the left)

Party On People a Laser Tag and Nerf party venue, has opened on  Portland just before it becomes Cole Harbour Rd.

The new Micahel’s in Bedford Commons has an opening date set for September 9th.

Riot Snack Bar has opened on Quinpool where Garden of Eat’n most recently was. With items like a tornado fry and Cashe Queso they look to be a little unique.

If you like couponing and want a site with a Nova Scotia eye check out Bluenose Couponer, https://bluenosecouponer.wordpress.com/ you can also find them on Twitter and Facebook.

Dollarama has gone to the next level and started introducing $4 items this week.