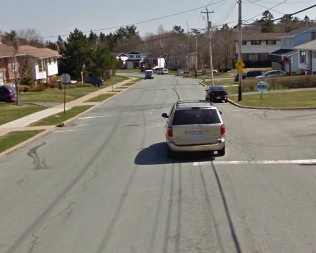 From HRPD:
Investigators in the Halifax Regional Police/RCMP Integrated Major Crime Unit have laid charges in relation to the fatal motor vehicle crash which occurred earlier this week.

At 10 p.m. on Sunday, Halifax Regional Police responded to the 100 block of Cranberry Crescent in the east end of Dartmouth for a call of car that had struck a pole. Upon arrival, police learned the driver and a passenger had fled the vehicle. Fifteen-year-old David Alexander Julien of Dartmouth was located in the back seat with serious injuries and was subsequently pronounced dead at the scene.

The two men who turned themselves in at the Dartmouth station at 11:45 a.m. yesterday have since been charged. Eighteen-year-old Matthew Lesley Grimm of Cole Harbour faces charges of dangerous operation of a motor vehicle causing death, two counts of breach of an undertaking and one count of breach of probation. The passenger, 18-year-old Thomas Glen Dixon of Cole Harbour, is charged with breach of an undertaking. Both are scheduled to appear in Dartmouth Provincial Court today.