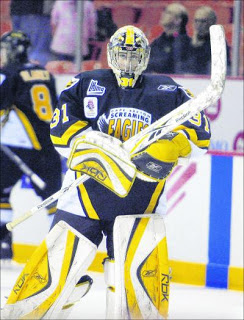 Chris Tremblay Likes Roy’s Chances
Today on CKDU Sports Chris Tremblay, Halifax Mooseheads insider, provided an analysis of this year’s draft. Tremblay thinks Olivier Roy, goalie for the Cape Breton Screaming Eagles, should be in the NHL playing for the Edmonton Oilers in several years.
Citing a lack of depth in the Oiler’s minor league ranks, Tremblay says the fifth round pick should eventually get a shot at the big leagues after honing his craft in the AHL.
“Roy has Marc Andre Fleury type athleticism which should serve him well,” said Tremblay. “However his height at 5’11” could hurt his chances.”
Tremblay also thinks Simon Depres, Saint John Seadogs blueliner chosen by the Stanley Cup champion Penguins, should play in Pittsburgh eventually. “Depres is the total package; his only knock is a lack of physical toughness but that should change as he matures” said Tremblay. 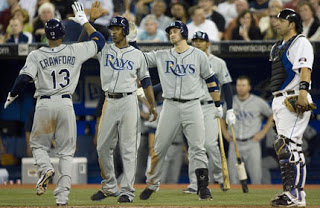 Jays Slide Continues and Other Notes

Even the return of Doc Halladay couldn’t get the Toronto Blue Jays back on track. Halladay pitched his first game in over 10 days, but 2 earned runs over 6 innings wasn’t enough for the stagnant Jays offence to overcome. The once mighty bats of Toronto could only muster 5 hits and 1 run vs Tampa Bay Rays rookie Jeff Neimann who improved to 7-4 on the season……Brian Burke didn’t make any friends over the weekend in Montreal. Booed lustily by Canadiens faithful as he approached the podium to announce Toronto’s first selection in the NHL entry draft, Burke fired back at the fans to the media afterwards. “I will tell you this – the best hockey fans on the planet are not in Montreal, they’re in Toronto,” said Burke. “When we host this event in a couple years this will seem like child’s play for the booing they get in Toronto.”……….love the Magic trade for Vince Carter. They only gave up Rafer Alston, who was probably out anyway, and Courtney Lee, a tough defender but easily replaced. The deal makes a great Magic team that much better. Too bad Hedo Turkoglu isn’t that excited. Hedo opted out of his final year with the Magic to pursue big dollars in this year’s free agent market, which will be a lot thinner than the 2010 class. Next year’s market will consist of Lebron James, Dwayne Wade, and Chris Bosh……….before the MLB season, Tom Verducci of CNNSI submitted his annual list of pitchers who were dominant in 2008, but based on thier increased workload, would be in store for a injury plagued season in 2009. Fireballer Tim Lincecum of the San Francisco Giants was on the list, but I guess Lincecum didn’t get the memo. After a rough April, Lincecum is now 8-2 with a 2.37 era and 3 complete games in his last 4 appearances, culminating with a 2 hit shutout of the St.Louis Cardinals earlier tonight. Sorry Mr.Verducci.