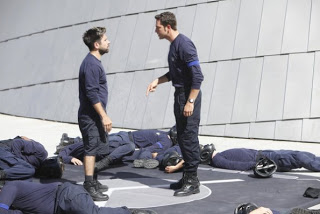 Chuck got off to a bit of a rocky start in this final season, but Friday night’s episode certainly restored any lost faith (which was very little) I had in the show. “Chuck vs. The Frosted Tips” was a great episode and was the first this season to have that classic Chuck feel to it.

Morgan continued to act like a jackass and, thanks to a bug Casey placed on his crush Verbanski, the team realized that he’d revealed himself to be the Intersect and had signed on to work for her company. Had we not known that the Intersect was screwing with Morgan’s brain this would have been a amjor betrayal, and for much of the episode that’s how Chuck himself saw it. Luckily, his sister is a brain doctor with a special knowledge base regarding the Intersect, so the team wasn’t in the dark for too long about Morgan’s condition.

It wasn’t going to be easy to get Morgan back though, since he wasn’t acting like the real Morgan and wouldn’t realize what the Intersect had been doing to his brain. Chuck had to trigger those memories and although by the end of the episode he’d succeeded, they’re now facing a much more serious problem.

It turns out that the Intersect that was downloaded into Morgan’s brain hadn’t actually been given to them by Beckman. (Loved seeing her this week!) It was a trick and this Intersect, which had a bug designed to mess with your brain, was likely planted by Decker in order to destroy Chuck. Now thanks to the fact that Morgan blabbed to everyone that the Intersect was in his head, the CIA has placed a kill order on him. When the episode ended, Morgan hadn’t gotten Chuck’s panicked phone call and was walking toward his scooter (or whatever that vehicle was) that had just had a bomb planted on it.

I like how this twist sets up the rest of the season to be Carmichael Industries vs. Decker, since Morgan and Verbanski Corp. were obviously never the real villains.

As for the episode itself, I thought it had the perfect cocktail of comedy, action and heart that makes Chuck so good. I laughed a lot during this episode, from Casey’s attempts to ask Verbanski out on a date to Morgan’s ridiculous antics, like getting frosted tips. Awesome also had some funny moments as he began his stint as a stay-at-home dad, and even Jeff and Lester made me laugh this week. The comedy was definitely on this week.

The action was great too, though, since Chuck, Sarah and Casey not only had to get Morgan back from Verbanski Corp. (along with the CIA-sanctioned mission he’d taken along with him), but they had to complete a mission. I mean, Chuck running through fire with Morgan on his back? You can’t beat that!

And that’s also where the heart of the episode came from – Chuck and Morgan’s friendship. The references to “Seventh Grade Morgan” and the accompanying story about our then-mustached friend getting too big for his britches, and subsequently pantsed (or “britched”?) was a reminder of how long these guys have been pals, and how nothing will be able to come between them.

What did you guys think? Did this episode raise your hopes for the rest of the season?