Following a stellar episode last week, Dexter continued to impress me this week with “Nebraska”. The episode, which saw Dexter travel to Nebraska with the hallucination of his brother Brian to track down Trinity’s son, could have gone in a number of directions and ended up surprising me by taking an unexpected, but excellent turn. 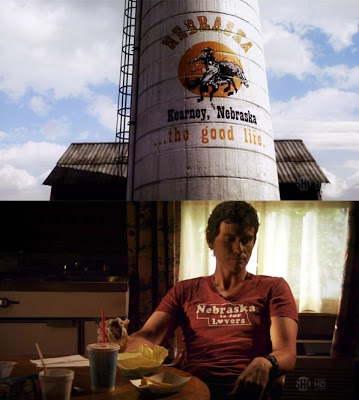 The episode began with Deborah bringing Dexter into her office to tell him that Trinity had killed again. This time, he’d tracked down his family who’d been placed in witness protection in Middle Of Nowhere, Nebraska. He’d killed his daughter in the bathtub and bludgeoned his wife before pushing her down the stairs. He’d also attacked his son Jonah, who managed to surprise.

What a surprise, noted Brian. Dexter didn’t need much encouragement from his own hallucination in order to use the time off Deb had offered him to drive to Nebraska with plans of killing Jonah. The road trip was manic and crazed – the first time I can really remember being scared of Dexter, and feeling uncomfortable about anything other than my own guilt over rooting for a fictional serial killer. Dexter acted completely unlike himself, having sex with a trampy cashier at a truck stop, stealing her gun and recklessly shooting it at signs as he sped along the highway. Later he killed a hotel manager who’d stolen his knives and forensics kit with a pitchfork. Watching Dexter (and Brian) relish these moments and have so much fun was uncomfortable to watch, which is what made the episode so strong. 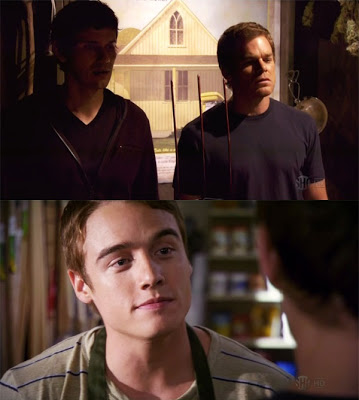 The writers could have pushed this farther, but in a season that only has twelve episodes and has yet to fully delve into the Big Bad of the season, I can understand the need to get Dexter back on track and back to Miami. Having Dexter recklessly kill innocent people would have been an interesting development, but the loss of sympathy could have changed the tone of the series too much. Who would he have killed? Mothers? Children? Dexter still needs to go home to his son, so I understand the hesitation in changing the character too much or for too long under Brian’s influence.

Once in Nebraska, Dexter confronted Jonah and, despite Brian’s insistence to just off him, went about his ritual of making sure that Jonah had been the murderer. Jonah admitted his guilt and ran, but later asked Dexter to meet him at a warehouse. They fought, but Jonah wasn’t trying to kill Dexter. As Brian put it, it was “Death By Dexter” – Jonah felt so guilty about killing his family that he wanted Dexter to end his life.

It turned out that being married to the Trinity Killer had driven Jonah’s mom more than a little crazy. She blamed her kids for Arthur’s ways and hoped he’d come back and find her. The madness drove Jonah’s sister to suicide, and in a fit of rage Jonah killed his mother of what she’d done to his sister. Dexter knew Jonah felt remorse, that he wasn’t a monster, and instead of killing Jonah he told the kid to forgive himself and sped off, driving his car into the hallucination of Brian in the process. 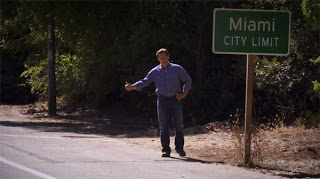 Dexter sparing Jonah’s life served as a kind of redemption after having killed Nick, who quite frankly deserved that fate. Despite Brian’s insistence that Dexter needn’t live by Harry’s code and could kill anyone, not just criminals, Dexter chose not to kill just for the sake of the thrill. He might enjoy watching the light go out of someone’s eyes as they die, but Dexter has enough light in him, along with his darkness, to choose not to kill. As Dexter returned to Miami, he picked up Harry as a hitchhiker along the side of the highway.

Dexter’s road trip to Miami meant shoving Deb to the side, which was made all the more interesting since he was “with” Brian. She needed him back in Miami, but he ignored his phone calls. Yet Dexter did pick up the phone when he thought it was Jamie calling about Harrison, showing that even under the influence of Brian Dexter still cared about his son, and therefore still had some light in him. It was another interesting layer in the journey Dexter took this week, both literally and metaphorically. 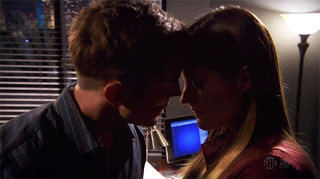 Meanwhile, Masuka’s intern Louis helped Deb out by narrowing down a list of former students of Gellar’s who could be part of the Doomsday Killer duo, following information given to them by the girl Travis released last week. Miami Metro is closing in on Travis while Dexter is off on a joyride, and I’m interested to see whether Dexter will be able to track down the killers before his department does. Louis also showed Jamie the first version of his new video game, which is more than a little based on Miami Metro Homicide. As I said last week, the relationship between Jamie as Dexter’s nanny and a guy who’s making a video game based on Dexter’s workplace has to be going somewhere, and I’m really intrigued by it. 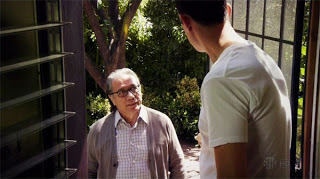 Now, onto the overlooked Doomsday Killers. The season is half over, so I really hope Dexter starts to pour more into this storyline. Now that Dexter is back, he needs to get more involved in this for it to become exciting. Since I think we’re all 99% sure that Gellar was murdered by Travis and is now being hallucinated by him, I think it’s time to confirm that and have Dexter figure it out.

The girl Travis imprisoned and then let go came forward, and offered up some important information – that there was an evil professor and a weaker guy doing his bidding, that they called her the Whore of Babylon, and she was pretty sure they were forcing her to drink blood – possibly Travis’s own. Gross.

I like that we’ve gotten to see Travis interact more with his sister though, because it shows just how normal he can pretend to be. He’s got an imaginary friend in a church trying to cause the end of the world, yet he’s making jokes with his sister about auto-correct (“I texted my boss ‘I have two tickets to jizz-fest'”) over breakfast. He’s trying to embrace the light, which directly plays into Dexter’s own struggles and his interactions with Brother Sam this season. However unlike Dexter, I don’t think Travis will be able to reconcile darkness and light.

Having reached the halfway point, I think Dexter is at a very important stage in the season. If Dexter begins to get more involved with the Doomsday Killer(s) as Deb’s own investigation starts to gain speed, I think I’ll have positive feelings about the season as a whole. But the Doomsday Killer storyline hasn’t yet gained that momentum, and if it doesn’t soon it could grind the excitement of the season to a halt. I think when happens in the next few episode of Dexter could define how I feel about the sixth season as a whole, and hopefully I won’t be disappointed. I know some fans of the show have already written this season off as a weak one, but so far I’ve liked it. I’m looking forward to seeing where it goes in the latter half of the season.

What did you guys think of “Nebraska”? Did it impress or disappoint you?