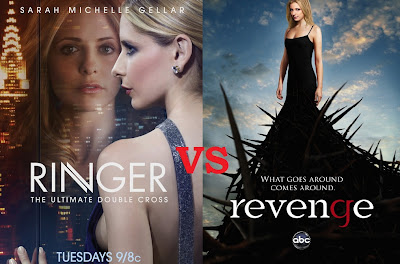 Choosing which shows to watch out of the crop of Fall TV selections is always difficult. Even as the season began, I talked about not wanting to miss out on something good vs. becoming invested in something only to see it cancelled a few weeks down the road.

So I made a few choices and had mixed results. I like Up All Night and New Girl, but I had to dump 2 Broke Girls. I’m on the fence about Once Upon A Time but am watching still, albeit on a DVR-for-later basis.

But one new show that I’m really close to abandoning is Ringer. I finally got around to watching last Tuesday’s episode late last night, almost a week after it aired. I watched it while I sorted laundry, washed dishes and puttered around my apartment. And it’s really too bad, because I wanted to like Ringer. I like Sarah Michelle Gellar. The premise was interesting enough. And it features Logan Echolls, for crying out loud – surely that should be enough to maintain my interest, right?

But no. The Logan Echolls storyline is going down the incredibly tired and predictable Hot For Teacher route as Juliet obnoxiously pursues her schoolgirl crush on him, and the rest of the series is just barely keeping me interested. It feels like every episode is a tease, and there’s rarely a payoff. After all this time, we still don’t know why Siobhan left the way she did. We don’t know anything, and I’m getting tired of waiting.

Meanwhile, basically everyone I follow on Twitter is obsessed with Revenge, a show I declined to watch. I suck! At the time, I thought “I’m really not a fan of campy nighttime soaps, and if I take any on it should really be the one starring SMG.” It was a valid argument – I hadn’t even planned to watch Ringer, these shows really aren’t my thing, and it’s always a good idea to go with a show starring someone you’re rooting for.

But seriously, everyone likes Revenge, and now I have to catch up on seven episodes if I’m going to get on board. That might not sound like a lot, but y’all know how many shows I already watch. Should I abandon Ringer? Should I try to make room in my schedule for two R-named nighttime soaps? Is it as good as everyone says? Tell me!

Ringer vs. Revenge: I Made The Wrong Decision
https://haligonia.ca/ringer-vs-revenge-i-made-the-wrong-decision-48697/