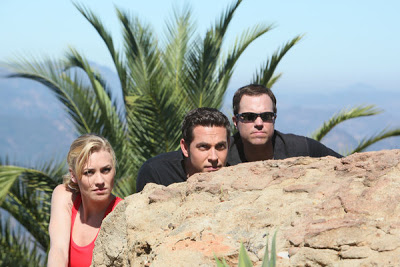 OK, you guys know how much I love Chuck, right? And it’s because of that love that I’m reserving judgment about this final season because, honestly, I have faith that it’s going to get better.

What I’m not sure of is if Morgan as The Intersect was the best decision. In the second episode of the season, Morgan was decidedly unlikable. He was overconfident, he wasn’t a team player and he almost got himself and Chuck killed. Something or someone needs to deflate Morgan’s ego before it overtakes the whole show.

The reason I think everything will be OK? By the end of the episode, it had become clear that the Intersect is messing with Morgan’s brain. He’s forgotten things that used to be inherent aspects of his personality, like who Luke Skywalker is. So chances are that’s why he’s also forgotten to be a nice guy. This is a great twist – as we saw last season when the CIA put the Intersect into the brains of a few carefully chosen agents, not everyone can handle it. Chuck is special, that’s why he got it in the first place. Chuck might not need the Intersect to be a good spy anymore, but is it possible that the Intersect needs Chuck in order to be valuable?

I found the rest of “Chuck vs. The Bearded Bandit” to be a little sloppy, but I enjoy the competition that’s been set up by giving Carmichael Industries a rival spy agency, and I like the fact that the rival is headed by Casey’s old flame even more. Casey has a love interest! That’s so rare! (So I guess things aren’t going to work out with Alex’s mom, then?)

So while this episode might not have been my favorite, I think it gave us enough plot development to give me high hopes for the rest of the season. What did you guys think?