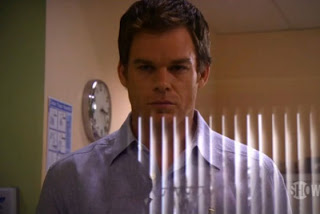 You know what I hate? When life gets in the way of my TV watching schedule. I couldn’t stay up for Dexter on Sunday night because it comes on at 11pm where I live, and Daylight Savings Time mad screwed with me this weekend. (Also, that means it’s now dark when I leave work. Brutal.) And thanks to an evening exercise class that has left me feeling like I got hit by a truck, I didn’t end up watching “Just Let Go” until late last night.

Some of the other reviews I’ve read for the episode weren’t positive, but I thought it was good. We’re seeing many of the main characters struggle with their identities and making good decisions this season, and I like where that has taken the show.

I’m sad to see an end to Dexter’s friendship with Brother Sam, but I also kind of like that in the end the relationship has left Dexter with more questions than answers.

The three shots fired at Sam didn’t immediately kill him, but they left him in a coma with injuries he likely wouldn’t recover from. He awoke just long enough to tell Dexter who’d shot him, information Dexter had already deciphered for himself after seeing security footage of the shooting. It was Sam’s employee Nick who’d done it, the guy Sam had risked his life to help on more than one occasion.

Dexter wanted to tell Sam he’d make sure Nick paid for his crime, but Sam had other plans. He asked Dexter to deliver a message to Nick, that Sam forgave him. Sam knew Dexter had a darkness in him, but he also saw a light. He wanted Dexter to let the light overcome the darkness in this one instance and let Nick go. It was the man’s dying wish, and Dexter struggled over what to do with it.

Dexter took Nick to the beach where Nick had been baptized and confronted him. He told Nick that Sam forgave him, but he also asked why Nick had done it. Nick thought Sam had lied to him, that he was full of crap – Nick’s life was no better following the baptism than it had been before it. For a minute there I thought Dexter really would let Nick go. I thought he cared enough about Sam to follow through on his dying wish, and I thought he would empathize with Nick’s feelings about the baptism and the empty promise of how god could save your life. But then Nick laughed. He laughed out loud at the idea of getting off scot-free with the murder. Dexter lunged at him and drowned him in the water.

What I think was interesting was that this wasn’t one of Dexter’s typical calculated murders. This was a murder of passion, something we don’t often see from Dexter. It was also interesting to see Nick drowned in the same waters he’d been baptized in. It’s not what Sam would have wanted, but Nick’s behavior barely gave Dexter the chance to honor that. Now that Dexter let the darkness take over, despite Sam’s wishes, I’m interested to see how he’ll move on from that. When he walked away from Nick’s drowned body, instead of hallucinating Harry he hallucinated his brother, applauding his actions.

Over at Miami Metro, drama is heating up in a way that I’m totally on board with. Deb is struggling with her new role as boss, since she can no longer chat with her colleagues or even really her brother. She’s so overwhelmed that she’s actually considering voluntarily talking to a therapist, which is huge for Deb.

She’s also got to deal with Quinn, who has become an even bigger mess. The professor he slept with has become a major person of interest in the doomsday case (saw that one coming a mile away) and he’s obviously still having a really hard time with their breakup. He drunkenly crashed Deb’s housewarming party and ended up getting punched in the face by Batista after he was rude to Jamie.

Masuka’s new intern, who has a total man-crush on Dexter (who wouldn’t?), isn’t actually a prospective forensics professional – he creates video games. He also has romantic chemistry with Jamie, who spends a lot more time with Dexter than most people would. This has to be going somewhere, right?

We still don’t have confirmation over whether Professor Gellar is dead and being hallucinated by Travis, and considering he/they are the Big Bad of this season the storyline hasn’t gotten a lot of attention so far. That’s because of Brother Sam, as evidenced by the fact that Dexter abandoned tailing Travis once he heard that Sam had been shot. Now that Sam is gone and Dexter has seemingly embraced the darkness, I expect to see the doomsday killers storyline, and Dexter’s involvement in the case, really heat up in the latter half of this season.

What we did see this week indicated that Travis is having a serious identity crisis, whether Gellar is alive or not. Gellar refused to give the woman they’d abducted painkillers for her injured arm, who was begging him to let her go. She said she was a mom, and that she could tell Travis was a good person. Travis went to visit his sweet, teacher sister, which was a sure sign he’s doubting his actions. When it came time to brand the woman with some kind of symbol, Travis caved and released the woman.

So what did you guys think of the episode? Do you like how this season is shaping up, or are you disappointed that Dexter hasn’t been more involved with the doomsday killers so far?