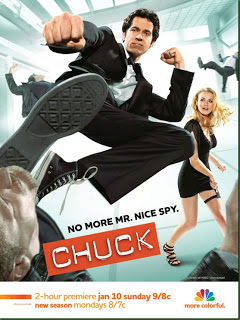 with commercials before. I don’t like it. I mean, I still liked the show. But I miss the days of barreling through several uninterrupted episodes.

The season four premiere of Chuck

felt a little awkward, but it seemed to find its stride midway through the episode. In the beginning Chuck and Sarah were trying to navigate a long-distance relationship. She was off chasing bad guys with Casey, and he (now retired) was traveling the globe in search of his mom with Morgan. Yes, Morgan. Oh, and he didn’t tell anyone. How we were supposed to believe that Chuck could go on a round-the-world mission without alerting anyone (just because he doesn’t work for the CIA doesn’t mean they’re not still watching him, right?) I’m not sure, but once that was over the episode kicked into high gear. 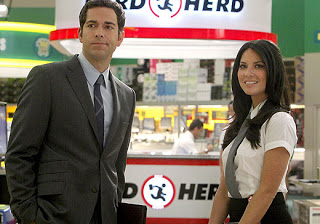 My favorite new thing? The Buy More. There’s been a lot of buzz this summer about the brand new Buy More and the special secret agents who would pass through it. I don’t love stunt casting, but when done right a guest star can be pretty fun. I liked the shiny, perfect, regimented look the new Buy More has, and I love that General Beckman has a place there. When she’s yelling at Chuck through video conference, you lose out on the comedic effect of how freakin’ tiny she is. Olivia Munn’s guest appearance was very brief – is she sticking around for more than once episode? I’d like to see her and Morgan interact a little more
.
Obviously, we knew Chuck’s retirement from spy work would not last long. The show just isn’t as compelling if Chuck isn’t a spy, even if he is trying to track down his mom. General Beckman sabotaged his job interviews and he seemed to realize that it is a hell of a lot easier to track down his mom with the help of the CIA. As he and Morgan traveled to Russia on a lead, they found Casey and Sarah there too – in trouble. Chuck had to choose: rescue Sarah, Casey and Morgan or download information from a computer that could reveal what happened to his mom. Chuck chose his friends, because he’s Chuck, but Sarah did find out that his mom had been captured in Russia. At the end of the episode we saw his mom (Linda Hamilton!), kicking butt.

Chuck quit being a spy because Ellie asked him to, and just as he went to break the news to her that he’d gone back to his old gig she gave him some news of her own – she’s pregnant! Yes, Ellie and Awesome are going to have a Mini-Awesome. I can’t wait to see Awesome doting on a pregnant Ellie, and I can’t wait to see them as parents. But it meant that Chuck didn’t break the news to his big sis that he was re-entering the dangerous world of being a secret agent so, once again, he finds himself lying to her and saying he works at (what else) the Buy More. Oy. Can’t things ever work out for this guy?

What did you think of the season premiere of Chuck

? Are you excited for this season?

Chuck: To Russia, With Love
https://haligonia.ca/chuck-to-russia-with-love-25844/