So how does a girl who needs rest spend her Saturday in Florida? At the beach of course!  We decided to hit the road for a mini road trip to head toward Tampa and hit up Clearwater Beach.  We let ourselves sleep in and have a leisurely morning, packed us up some snacks and lunch to take for the beach and then grabbed breakfast again at IHOP. I love breakfast foods and I don’t mind going out for a big breakfast to start a long day.  This time I got a pancake combo with eggs over hard, bacon and hash browns: 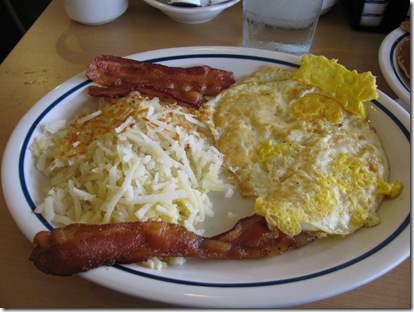 And for the most important part, the pancakes, I got the “healthy” option of wheat with almonds and walnut pieces with blueberry coulis on top.  Oh yeah and a big blob of whipped cream that cancelled it all out! lol 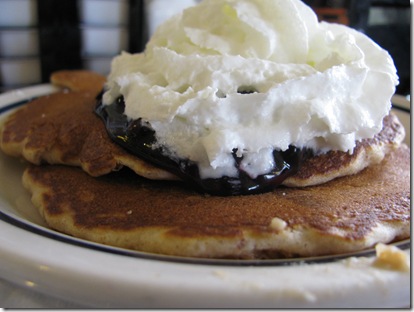 Then we hit the road!  We estimated the drive would take an hour and twenty minutes based on the mileage, but it ended up taking THREE HOURS and TEN MINUTES because the traffic was insane once we got to clearwater!  Something about a warm Saturday afternoon in Clearwater makes people want to go to the beach! lol   It was bumper to bumper and this mamma had to peeeeeeee! lol 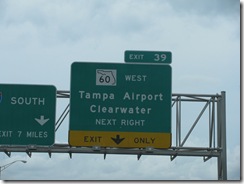 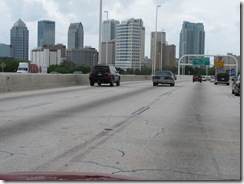 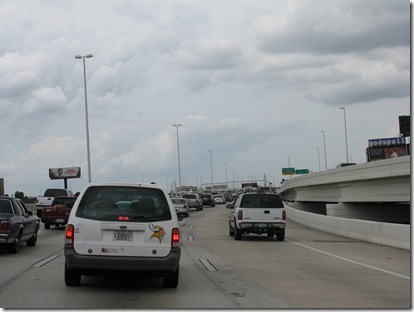 I was needing a snack and our packed snacks were in the cooler in the trunk and I managed to find a half of this Chocolate Peanut Butter Protein Luna bar in my purse which was perfect to tide me over until we landed on the beach.  It was another winner: 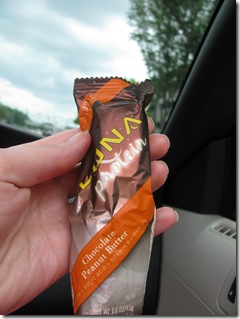 All signs were pointing to getting close, but the traffic was saying otherwise! 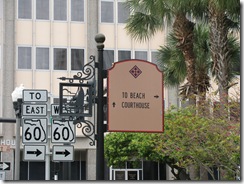 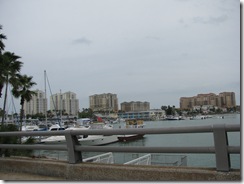 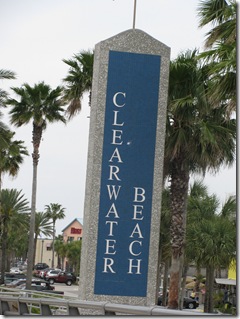 We finally arrived and finding parking was another ordeal because all of the parking lots were full.  We ended up parking indoors at a nearby hotel which was just as good.  Found a restroom and then it was to find a spot to plop our bums amongst the sardines: 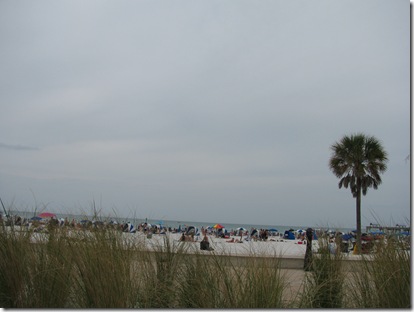 How fun would bouncing around on one of these things be?! 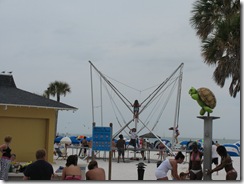 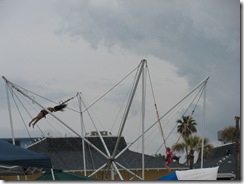 As nice and warm as it was, it was a great day to just veg on the beach because the sun wasn’t out beating down on you and the breeze was mild so you didn’t get too cool either.  We plopped a spot somewhere around these fine folks: 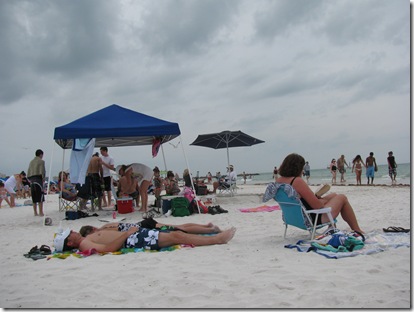 I packed up PB & Banana sammiches and plain PB sammies too.  I got some fresh ground nut butter at Whole Foods when we first arrived that ended up being perfect for this purpose.  It was perfect with a side of Baked Lays too.  There’s something about chips going perfectly with a sandwich, isn’t there? 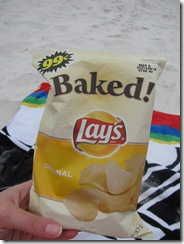 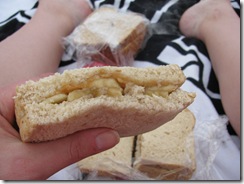 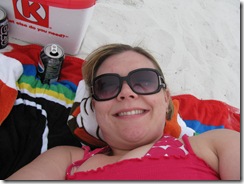 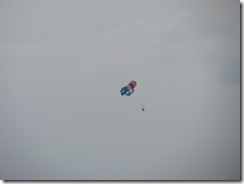 The sand was lovely!  So soft and powdery. 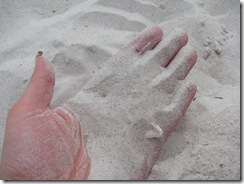 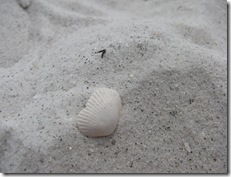 I went to the shore to test the water and surprisingly it was a little on the cool side, so I didn’t even bother to get wet 🙁 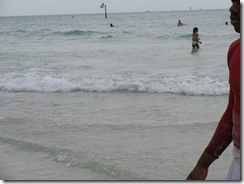 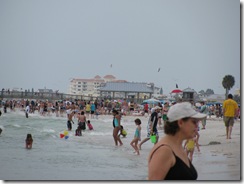 I come from a life of living on the coast of the Maritimes and grew up around beaches.  It’s in my blood and I just could not imagine not living near the water.  That said, I also grew up where the population doesn’t even put a DENT in the population here and I don’t think I would have found it as enjoyable to pretty much be camping right up beside strangers beside you.

Side note: The other thing I noticed too is how desensitized I have become around smoking.  In Nova Scotia, we now have laws that you are no longer allowed to smoke in public places or within so many meters of entrances of things (something like that.)  Smokers complained about it at first because that meant that you could no longer smoke in the bars either, but after a while it has now become “normal” to not be subjected to cigarette smoke, which in my opinion is how it should be!  It is your decision to smoke and not mine to be subjected to second hand smoke while in a public place.  I am sooooo grateful for that because I simply cannot stand being around it.  Here in Orlando/Kissimmee/Tampa, there are many more smokers and I notice it big time.  Even at The Magic Kingdom when everyone was waiting on the bridge to watch the fireworks (in a group standing in one place) there were people smoking away around all of the kids and I just didn’t get it.  I guess it’s just what I am used to and I’m not a smoker, but I was so ticked off that the man next to us would light up when it was wafting over to the little kids and me, clearly pregnant.  I had to go for a walk around the crowd to get away from it until he was done while I would have otherwise been sitting and resting on the ground because I was in a lot of pain.  What is your opinion about smoking in public places.  Do you need a law to tell you if it’s appropriate in certain circumstances? Is it just because it’s what “normal” in your society that makes it ok or not?

I took some time to just lay there to relax and listen to the beach (my favourite sound of all time), but all I could hear were people and the birds flying around.  A totally different experience.  Look at all the people! 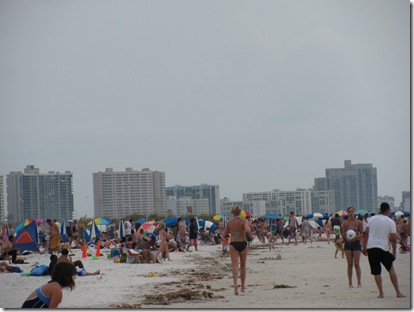 After a long drive home, we decided we had no supper food left at the condo, didn’t feel like going to buy any, nor feel like sitting in a restaurant.  So we googled it up, ordered take out from TGI Friday’s and ate in at the condo.  I was craving some red meat!  We ordered an appetizer platter that included some sinful ribs, and crispy shrimp which I had a few of and for my entree I chose the cedar plank salmon fettuccini dish.  I’ve also been craving pasta like a mo fo lately too.  Must be from all the extra calories I’m expending while being preggers! 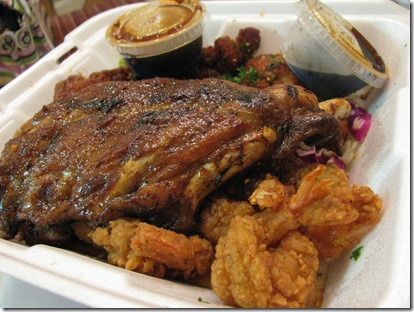 In never looks like much in a take out container, but this dish was really really good and hit the spot perfectly. 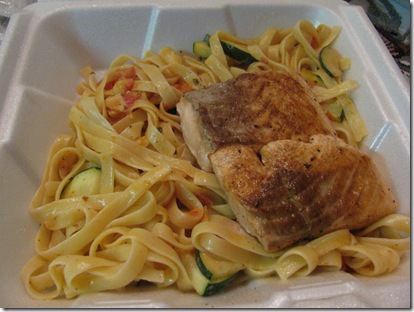 I spent the rest of the evening on the couch blogging about The Magic Kingdom while hubby streamed the hockey game on his laptop (couldn’t get any hockey games on the channels here and it’s the play offs!) *can you spot the Canadians?* 😛

And that was a wrap for our takin’ it easy Saturday where I didn’t have to walk or do much at all.  It was really really needed in a big way 🙂