A little bit of rain in the sunshine state is only a little nudge from mother nature for an opportunity to slow it down and rest!  Oh, and SHOP 🙂

The forecast revealed that amongst the sunny heat, we were going to have two days of rain.  Even though we got all of our baby shopping out of the way right away, we took the opportunity to hit up another shopping locale, The Mall at Millennia!

But before embarking on a day away from the condo, we whipped up some “home made” breakfast,  Vacation inevitably means eating out a fair bit.  The luxury of a condo (rather than a hotel) is that you have an opportunity to at least make “some” meals for yourself when you’re not out all day long or at least before you go.  Since our grocery selection is small, and since it was incredibly delicious the other day, a repeat was in order!

Multigrain toast with cream cheese on one side, mayo on the other sandwiched with greens and a fried egg + egg white cooked with sliced cherry tomatoes, goat cheese, dried chopped onions, S&P and a slice of natural deli turkey fried in the pan for some colour: 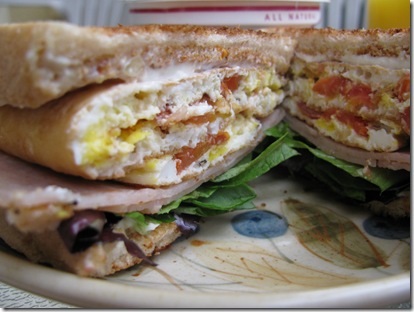 Every item on this sandwich was organic (except for the mayo).  I had to let hubby have some sort of vice :-)  This was so good, I KNOW this is going to make a regular breakfast appearance for this baby mama!

Along side was a glass of OJ and pomegranate Chobani yogurt.  I gotta tell ya, I was REALLY impressed with this yogurt!  I was expecting just a typical pomegranate “preserve” kind of flavour added, but not only was there that, but there were actual pomegranate jewels also in there which are easily on my top 10 favourite foods list!  The Greek yogurt is always a winner in my books all by itself, but add the pomegranate and you own my heart :-). 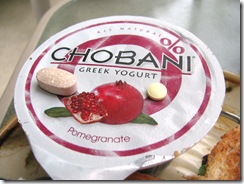 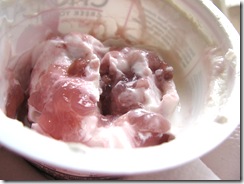 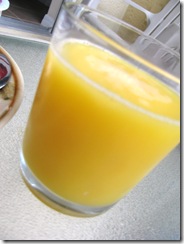 With my breakfast, I always have my pre-natal vitamin and folic acid with my OJ (calcium & vitamin D enriched).  OJ helps the absorption of certain vitamins, so it’s a double whammy.  One of the things I wanted to get my hands on while visiting the US, is a good all-in-one pre-natal multi AND an pre-natal omega supplement.  I have looked EVERYWHERE for omega supplements for pregnant women in Nova Scotia and have not come across a single one.  While I’m sure most omega supplements are safe for pregnant women, you just never know if the source is high in mercury, so I wanted to be “safe” rather than “sorry.” 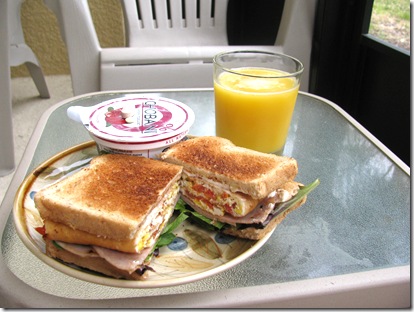 Then we hit the road for some shopping!  My hip/back/leg/foot seemed to be decent, so all was good. 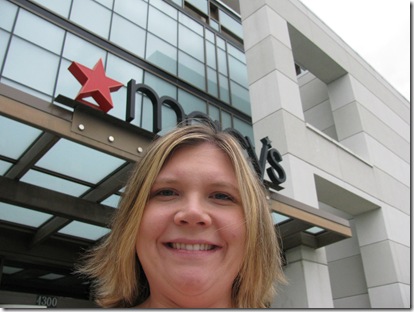 Before we knew it, it was lunch time and my hip/back/leg/foot issue, which I now suspect may be Sciatica  (which is somewhat common in pregnancy and not surprising considering my hip injury) and was starting to act up and a good sit down for lunch was in order.  I spotted a Panera and was really enthused to try it!  It was one of those places on my list to try while here: 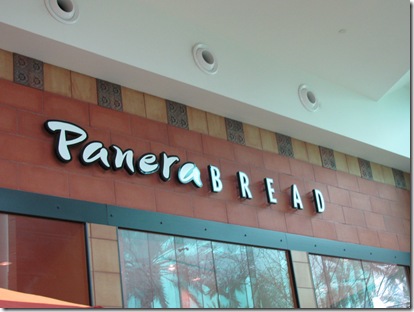 The special was a 1/2 Cuban Chicken panini on foccocia served with black bean soup sounded like a wonderfully tasty and nutritious option: 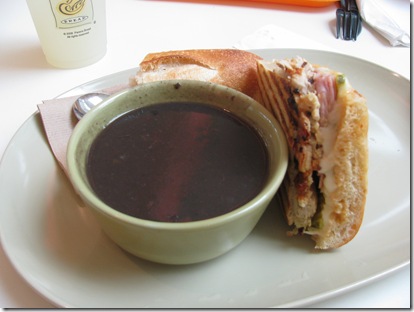 The sandwich was to DIE for!  I loved every single bite! 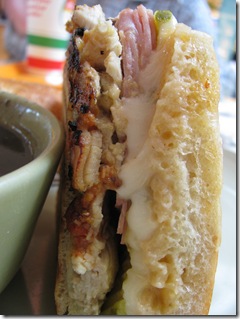 The soup was good (was way better then it looked!) and had a yummy taste of cumin (one of my favourite spices).  Although the taste of the soup was somewhat tiresome after a while.  I ate about half of the soup and the hunk of yummy bread served along side.  And there’s something wonderfully perfect about lemonade in hot weather that I absolutely love!  Had to have a thirst quenching lemonade too! 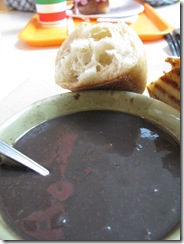 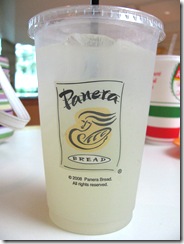 The only real items I had on my list for the mall was to stock up on the Dermalogica products that I love. I began getting adult acne around age 22 and have never had success with any product.  Some of it improved when I changed my diet and lost the weight, but it reappeared, most likely due to PCOS.  I started using Dermalogica as recommended by the esthetician who assessed my skin and my issue with adult acne and recommended a combination of products that I simply could not afford all at once.  The thing with skin care is (especially with problematic skin like mine) is that you truly do need to stick to a customized regimen to sustain clear skin in order to get the desired results.

I stocked up on:

I also use the Overnight Clearing Gel, but didn’t need to stock up because it lasts forever.  The price difference between U.S. and Canada are really significant (like many things), so I HAVE to take advantage of these opportunities!

At first I only used the daily clearing wash and oil control lotion and was only mildly successful. I started using the daily microfoliant and overnight clearing gel in addition to the other products I was already using when I went for a MUCH NEEDED facial when I was 14 weeks pregnant.  Although it’s unclear at this point if it’s the addition of the microfoliant or my pregnancy that is to credit for my skin clearing up, but all I know is that it has done WONDERS for my skin!  I’m convinced that part of it is the pregnancy even though first trimester broke me out even worse.  But what I do know is that I can continue to use the products after the pregnancy see where things lie at that point and then re-assess my skin from there.  Regardless, the products are excellent and I’ve even chatted with other estheticians who work at locations who do not sell the product, but who choose to use Dermalogica over the ones that they endorse at their salon.

So that’s the end of my little skin experience lesson for now, but thought I would share 🙂

So after that, while I would have loved to roam around and explore the stores at the mall, the pain was again setting in pretty bad, so I was eager to go.  We had to take a stop to K-Mart and Wal-Mart before going home (we haven’t had a K-Mart in Nova Scotia in YEARS).  When we got to Wal-Mart (which was like Super Target having the grocery store attached – I wonder how long it will be before we get the addition of the super market to our Wal-Marts?), it got to the point where hubby snagged me a wheelchair to do our shopping.  I felt a little like a knob, but it was the best decision ever.  There was no way I was able to walk around that monstrous store!

I did manage to score the prenatal multivitamins and prenatal omegas I had been hunting!  We have One A Day multis in Canada, but maybe our FDA doesn’t allow the prenatal omegas for some reason? These two bottles came in the same package.  I want to ensure the little peanut is getting his/her brain juice too! 🙂 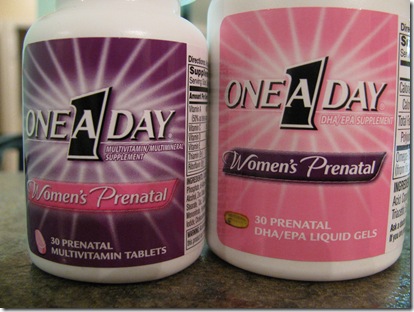 By this time it was definitely supper time and since we’re all out of main meal food items at the condo, we decided tonight would be hubby’s Longhorn Steakhouse night.  He loves this restaurant (as do I) and has talking about it ever since we tried it out in Maine during our last trip.  This was not a meal where we skimped on anything!  Except dessert, we decided we weren’t going to be wasting money and extra fat and calories on dessert with our suppers except for many one or two during our entire 10 days.  There was bound to be ice cream treats at the theme parks, so that is enough!

We started out with the delicious honey wheat bread which is perfectly crisp on the outside, warm and chewy on the inside = YUM: Then on came the Caesar salad.  I normally pick the “garden” salad over the Caesar, but thought I would enjoy a “good” Caesar in a good restaurant: 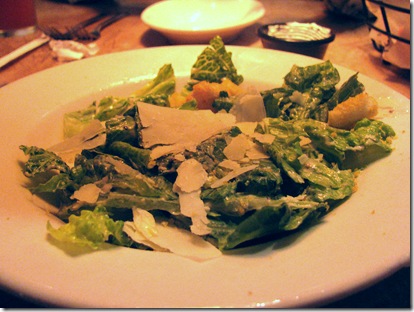 We had the most attentive and pleasant server we’ve ever had!  His name was Chad and he was outstanding.  Just all around helpful, attentive and didn’t miss a beat.

At the last minute, we decided to munch on the homemade chips & dip for an appetizer.  They were absolutely delicious.  So crunchy and awesome.  A little on the salty side, but a huge treat: 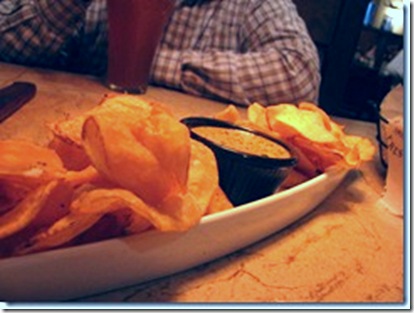 I was craving read meat and I never order steaks at restaurants, but since we were at a steakhouse, it was a good time to do it!  I had a 7 oz filet and before ordering the appetizer, I decided I wanted fries, but then wished I picked the seasonal veggies instead. I only had about 5 fries: 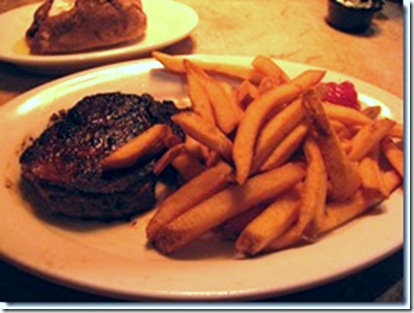 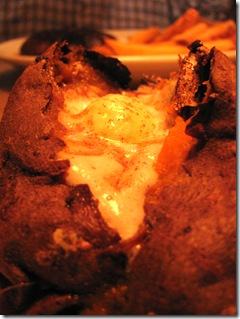 And the fries were DEFINITELY not needed because I added on the shrimp & crab au gratin which was not only absolutely delicious, but extremely rich and creamy: 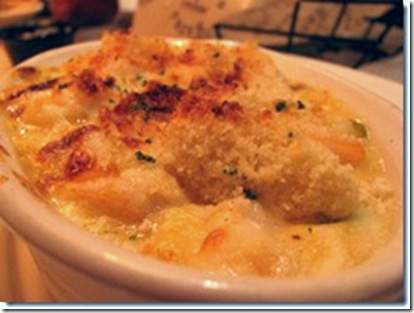 I was STUFFED TO THE GILLS, obviously! lol  We rolled ourselves out of our booths, headed back to the condo and relaxed while I iced my hip.