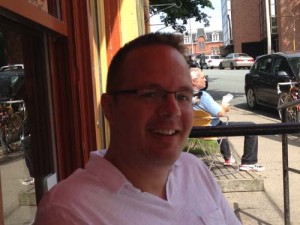 Recently I met with Christopher Mercer at Steve-O-Reno’s on Spring Garden Road in Halifax. I’ve been following him on Twitter (@mercerch) for a few years now but this was our first opportunity to chat at length in person.

Kimberly: My first question always is how do you take your coffee?

Christopher: I could say strong and rich but it’s actually milky and weak. One milk, one sugar.

Christopher: I’m from a small town in central Newfoundland called Grand Falls-Windsor. It’s a small former forestry town. Paper mill closed up a while back. Small 18,000 people, it’s not on the coast, it’s not a fishing town. It’s a nice place to grow up, much like Halifax. Very green, lots of old tree growth, things like that. A beautiful little town.

Kimberly: What made you decide to move to Halifax and stay on the East Coast?

Christopher: I originally left Newfoundland to go to Ottawa and work for Nortel back in the day. And after a layoff there and doing a few other things in between I decided to go back to Newfoundland and attend university. I’d attended college prior so I decided to go and basically upgrade to a university education. So I went back to Memorial and spent five years in St. John’s working on two degrees. Then I got recruited away from university by a company in downtown Halifax called Keane, now known as MT&T Data. I was working there for a few years and then moved over to RIM. Unfortunately that just ended, but business is business.

Kimberly: What were you doing at RIM?

Christopher: I maintained a number of systems so my title would have been Systems Specialist. My job was to run the Enterprise Wiki Solution at RIM, a vast system of wiki data that various teams contribute to, but being an enterprise system it allows you to do fun things like restrict content to only certain individuals or certain groups of individuals. It had a lot of security features. It was a very popular product. One built by a company out of Australia. It was fun to work with. I know it’s used in a lot of different places. There might be an opportunity to jump straight into a similar type of role and carry my skill set over that way.

Christopher: Well, right now it’s kind of boring. The winter is really when I do interesting things. You know, like most people: get up, go to work, spend the day at work, there’s nothing unusual or exciting there. The fun part starts at the end of the day. I’ve a strong interest in aquatics. I’m a swimmer. I’m a lifeguard. I also instruct, as a coach, swimming. I teach lifeguarding to new lifeguards. After I finish my day at the office I usually head to the pool and spend an hour or so teaching younger kids at the Dartmouth Crusaders Swimming Club out of the Sportsplex. After that I may or may not be teaching a private lesson like Bronze Cross, Bronze Medallion lifesaving courses. Or I might hop in the water and swim myself with the Master team I swim with. That’s when the fun starts happening. I’m doing a variety of things and from week to week that may or may not change. It’s a lot of fun and I get to work with some interesting and cool kids. People worry about the next generation and I gotta tell them: don’t be so worried.

When you’re working with guys in their 50s and 40s, sometimes you lose perspective on what’s coming. That’s valuable knowledge regardless of what you do. It’s a lot of fun, plus I’m teaching people lifesaving skills which at the end of the day when you know they can walk away and should someone need help these kids know what to do.

Kimberly: Besides aquatics, what else do you do for fun?

Christopher: I do have a budding interest in photography. I can’t say I’m great at it, at all, but I do enjoy it. I enjoy the creative process of trying to capture a moment and try to frame a picture. It’s something that I’d like to cultivate and grow more. It’s definitely a hobby. I pick up my camera when I can and shoot what I can. Mostly the cats. Lots of pictures of the cats.

You do what you can, with what you have, in the time you have. If I’m not in the pool and not playing with the camera, a good movie or a good book is a great way to pass the time. A lot of my time is spent with other people and sometimes you need that downtime alone.

Kimberly: Tell me about your cats.

Christopher: I have two: Linux and Pixel. They’re two furry creatures that live in my house that don’t pay rent and eat all my food. They’re cute. They’re great companions. I call them my furry freeloading friends.

Kimberly: What do you enjoy most about living in Halifax?

Christopher: Unlike growing up in Newfoundland, there’s a lot of beaches here within short distance of the city. You’ve got Martinique, you’ve got Risser’s which some people would argue is a bit of a drive but I’m used to further distances, you’ve got Rainbow Haven, Birch Cove right in the city, Elbow Lake, I could go on and on. There’s always a spot to go for a splash in the water and cool off in the summer.

I have a little bit of a thing for architecture. I enjoy good architecture in a building, especially around Dal, SMU, and this area of the city. The public library across the street, the court building and what used to be called TUNS. These are gorgeous buildings that you find in an era when brick and glass boxes weren’t the popular structure. I like that and I like St. John’s for that same reason. All along Duckworth and Water, the same type of idea. But I spend most of my time in Dartmouth. I live on the other side of the harbor in that urban village that’s right next door to Halifax. It’s just got this character that you wouldn’t believe. Contrary to all the stereotypes it is a beautiful community over there. It’s got something going on. There’s a very quiet, subdued energy but an energy that this community is growing. They have that King’s Wharf development going on. They have another luxury condo/apartment that’s going downtown. Two If By Sea Cafe is a big hit over there. I think that Dartmouth is going to be the place where people are going to want to live going forward.

Christopher: I think people would be surprised about me, especially given my opinionated nature, is I really am into community building. We’re all a member of various communities whether we want to admit it or not. We’re kind of all in this together. No man is an island. No one has done anything they’ve done, alone. They’ve always had support of friends, family, institutions, opportunities. I think I recognize that in our individualism as well as in our society. To that end I really am into community and making people realize you are part of a community and your actions and opinions have a wider effect sometimes. And that also has a positive spin: your actions and opinions have wider consequences in the positive. We bring about change right now by understanding I am a member of this community whether I realize it or not. I have an opinion an can invoke change around me. I think that’s a very powerful thing for people to realize that.