In our ongoing Coffee Q&A series, this week I met up with Jo Treggiari at The Wired Monk (5147 Morris Street). She’s the author of the acclaimed YA dystopian novel Ashes, Ashes and currently lives in Lunenburg, NS. We chatted over some yummy caramel apple ciders about living on the East Coast. 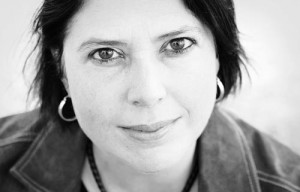 Jo: I’d like to say black but I take mine with milk…but strongly brewed French press.

Kimberly: Why did you decide to move to Lunenburg and what makes you stay?

Jo: I wanted to move back to Canada and I wanted to live by the sea. We took a vacation to Lunenburg and fell in love with it and made a crazy decision to move there. So we did. Why do we stay? Because it’s beautiful, it’s close to Halifax which is a big city, and there’s really quite a mix of artistic people there.

Jo: My day job is a writer. I have two published books: one is for YA and one is for middle grade younger children.

Kimberly: Can you walk us through a day in your life?

Jo: I always get up much earlier than I’d like to. I get up, I wake my children, I let the dogs out. I feed them. I drink lots of coffee. Then I walk the kids to school—my son first, then my daughter goes to daycare—with one of my dogs then I take my dogs usually for a five mile hike. Then I come back at around 1o and I write ’til my son comes home at around 2:30. There’s a lot of window-gazing and internet surfing and coffee drinking while I write. I try to write 1000 words a day if I’m working on a project, which I usually am. Then we go pick my daughter up from school and it’s mayhem until dinner and they go to bed. I try to write again after that.

Jo: I just joined a bowling league in Lunenburg and that’s pretty fun. It’s 1o pin bowling and smaller balls than I’m used to without the little holes. It’s very fast. There are all men there who just fling the ball down the lane at scary speeds—if you were standing there in front of it, it would kill you—but with precision as well. If I did that it would go across five lanes and probably nail some poor old granny at the other end of the bowling alley. It’s really scary to watch them because they do a whole wind up and then this thing just rockets down the alley. So, I’m bowling and I just learned how to hook rugs which is more exciting than it sounds. I’m doing that with some friends who are crafty.

Kimberly: What do you enjoy most about living in Lunenburg?

Jo: It’s small and it’s quiet. You can walk everywhere. But it’s not boring. As a writer, since I spend so much time alone, at least I have something beautiful and inspiring to look out the window at so that’s a positive thing. And then when I have enough of my own company and I’m going crazy, I can go out and know that there are people who are doing genuinely interesting things. It’s a mix of peace and quiet without being lost in time. It feels like there are cultural things going on and there’s that undercurrent of things changing.

Jo: It would probably be that I had a gangster rap label in California. That would be the most surprising thing. I put out horrible gangster rap records for about 10 years.