Our next Coffee Q&A guest is Jonathan DeRouchie who once shared an office with me at CBC. We caught up with each other at Just Us Coffeehouse on Barrington Street where we had a lovely lunch of pakoras and chickpea rolls with some Fair Trade coffee. His three-year-old daughter joined us. Jonathan is the father of three girls, runs a digital development company called Organism, and is currently on paternity leave as regional producer for CBC Maritimes. 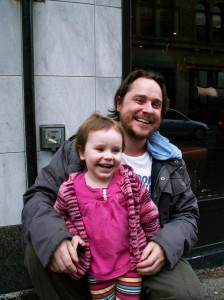 Jonathan DeRouchie with daughter outside Just Us Coffeehouse (1678 Barrington Street)

Jonathan: Matcha..? I just don’t like the taste of coffee as much as I used to. You have to put too many things in it to make it taste good. I like the actual substance itself so matcha’s good because it’s just tea. I guess I could just drink coffee black but then I wouldn’t like it even more!

Kimberly: Why did you decide to move to Nova Scotia and what makes you stay?

Jonathan: It was to get out of the city for five years or so, to let the kids be at the ocean, for a position here with CBC. It’s really good. It’s a beautiful province. Amazing nature.

Jonathan: Day job right now is mostly father, being on parental leave for almost a year until September, with a little bit of dabbling and tinkering with HTML5 and javascript and CSS. That would be a bit of a day and night job. I don’t really have a day job. They all blend into the same space and time.

Kimberly: Walk us through a day in your life.

Jonathan: Right now I would say a bit of juggling with freelance, client relations, girlfriend and child relations, and throw in a movie or a video game here and there. I guess lots of interactions with everything whether it’s people or computers.

Jonathan: I would say that pretty much everything I do is for fun. I love what I’m doing whether it’s hanging out with the kids, or working if you want to call it that. It’s all just really the same perspective. Everything should be fun whether I’m alone, with friends, with kids, or the dog on a walk.

Kimberly: What do you enjoy most about living here?

Jonathan: We’re just on the edge of the south shore in Black Point and right across the street is a beach. Definitely a pro. And the 40 kilometer trail right behind the house is also really nice. I also enjoy the solitude of not having friends dropping by all the time and always having to be in a social situation. I do like that. It’s meditative.

Jonathan: I’m pretty transparent, actually. People who know me usually know a whole lot about me but the one thing maybe: being a vegan.