Today we’ve got a brand new Coffee Q&A with someone I met while working at the CBC. Lisa Roberts is a freelance journalist and formerly a staffer at CBC Radio’s Information Morning. You can find her at lisaroberts.ca or follow her on Twitter @lisa_robe. 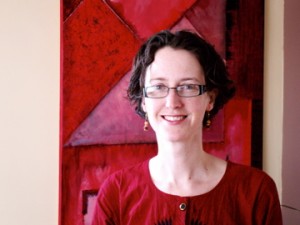 Lisa: I take it with less than one teaspoon of sugar though my sugar amount is creeping up again.

Kimberly: Why did you decide to move to Halifax?

Lisa: Originally it was 1991 and I graduated from high school in Cornerbrook, Newfoundland and I wanted to leave my hometown badly. Pretty much everybody who goes to Memorial from Cornerbrook starts in Cornerbrook ’cause there’s a two-year campus so I had to leave. I only applied to Dal. I definitely didn’t want to go to a smaller town; I wanted to go to a bigger town. I didn’t need to go too, too far away. And there was a program at Dal at the time that I was very interested in.

Kimberly: And why did you decide to stay?

Lisa: I really feel like I figured out friendship finally during my undergrad year. I have a whole bunch of friends who I’m coming up on a twenty year anniversary with now. So Halifax for me is associated with that. It’s associated with friends and building your own community and some of those people are still here. I left after my undergrad. I was sent off by Dusty Keeler playing “You’re Leaving on a Jet Plane” with a whole bunch of my friends singing at the old Brewery Market. It’s one of my favorite memories. I think about it every so often. I was away for six years: in Guatemala for two years, in Toronto for two years, and I was back and forth traveling. But at some point in Toronto I got really lonely and just went “OK, can I go back to Halifax now, please?” It would take a lot to tempt me away. I’d like to have another international adventure at some point but I can’t imagine this not being a home base. The depth of community that I have here would take a long time to replicate. Now that I have kids it’s adding layers onto that.

Lisa: I am teaching at the University of King’s College as a writing tutor and I’m really enjoying that and I’m doing some freelance writing. My son just started daycare in January so both of my kids will be in daycare three days a week. It’s just now that I’m having time to add more work onto my plate.

Lisa: I get woken up the first time at about 1:30. And then I put my son back to sleep. I wake up again at 5:30. I nurse him and put him back down and hopefully get another 45 minutes. I’m up usually at 6:30 and I do the bulk of the morning parenting ’cause I don’t find mornings as painful as my partner does. They both go out the door to daycare with their dad at about 8:30 and then I’m either going with them if I need the car for some reason or staying home and trying to turn myself into a productive person at home at that point. It depends on the day. On the days when the kids are with me then often we’re meeting up with friends. This fall was great. We met at Point Pleasant pretty much every Tuesday and we also have programs at the library. I’m lucky that my mom will come and pick up my daughter who’s three-and-a-half on some afternoons so that maybe I get a little bit of extra work and productive time in during my son’s nap. There isn’t a whole lot of regular-ness.

Kimberly: As a freelance writer, what are some of the projects you’re working on?

Lisa: One of the challenges of being a freelance writer is that I want to do stories that I’m interested in. My understanding is that a lot of freelance writers who actually make money are accepting assignments but part of the fun for me right now is to do work that I actually love. Part of my idea to keep the work coming without it being so onerous — to be constantly pitching — is to offer a service to people where I will do a three-hour interview and then write a 500-word essay about that person’s life story. Sort of modeled on the Globe and Mail’s Lives Lived column. It’s partly that I really like people and most people have really great stories. Particularly people like my parents’ generation who, unlike us, are not blogging and posting about themselves ad nauseam so they have really great stories but they’re often not on the record.

As a freelancer I’ve always enjoyed profiles. I think there’s a lot of people who would like to have something done like that either because they know that their grandkids are so much younger than them or they’re not sure when their health is going to fail. They’ve lived an interesting life and they want someone to help them capture that.  I think sometimes it’s actually hard to create that space with your own family members whereas it’s easier to hire somebody. I have the journalistic experience and the bit of distance.

Lisa: Not enough of late. A big goal for 2012 is to get going out again to live performance. I love live performance be it theatre or dance. The last few years because I haven’t had the flexibility to go out so much, I’m just aware of how much we’ve missed. Before we had our kids that was a real highlight. We’re really both interested in taking in some live art performances and the independent theatre that’s happening in Halifax. Sometimes there’s just an embarrassment of riches. I also really like singing and I’d like to join a choir but that might be a commitment too many.

Kimberly: What do you enjoy most about living in Halifax?

Lisa: I think it’s the bumping into people. I found that really challenging in Toronto that you could be at a really great event and maybe make a bit of a connection with a person but unless you exchanged business cards right in that moment — and this was before social media became prevalent — there was no reason to expect you would ever bump into them again. You almost had to pick your own micro-niche of involvement. It wasn’t alright that I went to both music events and also live theatre events because if I wanted to feel like I was part of a community I had to only do one. And I’m a total generalist dabbler. I like all kinds of stuff. So I love that about Halifax. I can go to all sorts of cultural events and bump into people. That’s so cool.

Kimberly: You made a point about social media. Have you found that’s changed your social sphere?

Lisa: It has. Particularly over the past eight months or so that I’ve been realizing how interested I am in municipal politics. For the longest time I thought of Facebook as a way of remaining connected with old friends and I’m still fairly Facebook-attached. I’m a bit of a neophyte with Twitter. But both through Twitter and through Facebook I’ve become connected to followers who are interested in municipal politics and it’s been one of the most enjoyable aspects of both those sites for me.

Lisa: I’m part of that burgeoning DIY food movement. It’s funny because I have this sort of ongoing duel with my partner because he is probably a better cook. And I hate it! He’ll decide to make something that’s my specialty and he’ll improve it. It drives me crazy.