This hilarious and touching musical tells the story of Georges, the owner of a glitzy and “exotic” nightclub in the French Riviera and Albin, his romantic partner and star attraction – the glamorous chanteuse Zaza.

When Georges’ son brings his fiancée’s conservative parents home to meet the flashy pair, the bonds of family are put to the test as the feather boas fly! A tuneful tale of one family’s struggle to stay together, stay fabulous and above all else stay true to themselves. 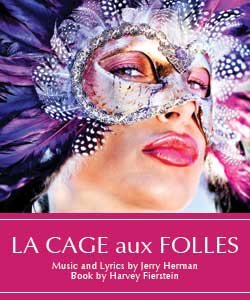 "We Are What We Are"

There are a couple of things to keep in mind with this review. We’re not usually fans of musicals and neither one of us are Gleeks. Don’t get me wrong. I love music. I just feel that the musical sequences are often a distraction from the plot line and I dislike a lot of Disney movies for the same reason. There’s nothing worse than getting really emotionally connected with what’s going on in a scene only to stop and think, “oh, they’re singing now.” That said, I really quite enjoyed La Cage! Perhaps because it was set in a nightclub the song and dance really wasn’t a distraction to me. That’s my benchmark for a good musical.

Steven Gallagher as Albin was—not to sound cliché but he really was—absolutely fabulous! It seems like another lifetime ago that I was employed in the fashion world but it brought me back to all the silly extravagances and outright fun of it all. One of my former colleagues was a transgender performer at night and it was just entertaining to see all the costumes and backstage antics brought to this performance. Ian Simpson as Georges had, by far, the strongest voice in my opinion. There’s an incredible warmth to his voice that really comes out during his rendition of “Song on the Sand.” Props to David Lopez as Jacob. So many little quirky mannerisms and gestures that spoke volumes about the character.

My other confession is that we recently spent a week in the Italian and French Riviera so I may be biased when it comes to this point but  I have to give proper recognition to the set and props designer Geofrey Dinwiddie. There are many seaside towns in the area that still cling to a sort of faded glory of the 1950s. (One of our hotel rooms was even called the Audrey Hepburn.) The home of Georges and Albin reflected that style of the area. Additionally, the nightclub stage was decorated with paintings of faded peacocks and it was a fitting juxtaposition of imagery. There’s also a certain elegance to the French Riviera and the boardwalk setting was both sparse yet wholly captured the ambience of the area with a low stone wall, a ship mast beyond that, and the café tables where couples could speak in low voices.

Overall, I recommend checking out La Cage. It was an entertaining two hours and the bar even has special themed martinis to try out during the 20 minute intermission!

On a final, more serious, note I have to take a moment to acknowledge that I couldn’t watch this performance without thinking of the tragic news out of Halifax a few days ago about the death of gay activist Raymond Taavel. I never knew the man in person but was aware of the great work that he accomplished in this city. I mention him because, to me, art truly can be a reflection of life. La Cage aux Folles is a story about people, first and foremost: our familial obligations, our insecurities, our trials and our joys in life. Fittingly, the general manager’s message in the playbill reads:

Behind the sequins and feathers, there is an important message about inclusiveness, acceptance, and perseverance that we can all embrace because it speaks to our everyday lives…

What more can I say?