[Hope everyone is enjoying the start of the Easter long weekend with friends, family and loved ones. This next guest post is slightly delayed in coming to you due to my busy but ever so productive week away in Toronto. @Lavender_Lines has been kind enough to share her experience of living on the East Coast in a farmhouse while her husband is away at the oilsands of Alberta. It’s a story that a lot of women and families on this coast can relate to, I think. Despite the hardship, I’m a little jealous that she’s getting chickens, especially if they look like these ones.] 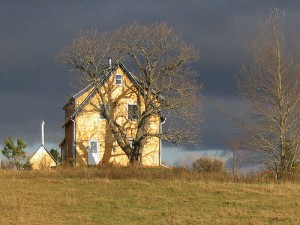 I have often had daydreams about living somewhere else, but my husband has always known he would stay on the East Coast. In fact, while I would, from time to time, picture living in a big city like Toronto or Ottawa, Jason held steadfast to his dream of owning a small farm on PEI, where he’s lived his whole life. The plan was to buy a small farm and slowly get into organic farming and animal rehab. A little piece of Heaven where we could also work on our writing and Jason could make his wire jewelry. For as long as I’ve known him, this has been his plan. He’d spend hours talking to me or anybody else about what he wanted to do. Never once did he ever waiver or think he’d like to live elsewhere. Over the years this slowly became my dream also and for the past six years it’s a dream we have steadily worked towards. And on October 1st of last year, that dream finally came true. A century old farm house and thirty seven acres of land was all ours to enjoy. But right now Jason only gets to enjoy it seven days out of the month. For the other three weeks he lives and works out of province. Outside the East Coast.

Jason is one of the many East Coasters who has to travel to the oilsands of Alberta in order to make a living. He’s an electrical apprentice and it seems that not only the best paying jobs are out West, but the only jobs in the field are out West. Deciding to leave the East Coast to work wasn’t an easy choice to make. Jason was out of work for a year, the whole time making weekly calls to local electrical companies to see if there was any work. But there wasn’t. So we made the tough decision of having him work out of province. And despite the fact that he spends most of his time away, his heart and home will always be here.

Lots of people wonder why we don’t pull up roots and move permanently to Alberta. While a move would mean that I would be closer to him and get to see him more often, that’s not the dream. Sure, it might be the easier route, but since when are we East Coasters known for taking the easy way? Yeah, it’s hard for him to be away, and it kills him to leave home, but it’s something that has to be done. Without Jason working in Alberta, the dream wouldn’t have been able to happen. This truth is what we focus on when one of us is having a rough day, wondering what we’re doing this for.

So for now we’ll continue being a long distance couple and I’ll stay here, keeping the home fires burning. At some point in the future Jason will be able to put his well worn luggage away and stay home with me. For good. Because now that we have our farm, that’s become the new dream.

Colleen is a book blogger and freelance writer. Her reviews and ramblings can be found at Lavender Lines. Jason is a also a book fanatic and while he works as an electrician, he’d rather be reading or writing. Together, they are living the dream of a rural life on the East Coast. Phase 1 saw them buying a farm house with 37 acres. Phase 2 involves chickens.