Home / Life / Coming Back… Briefly: On My Last Week as a Working Mom

Coming Back… Briefly: On My Last Week as a Working Mom

I didn’t realize how hard it has been.

I was (am) determined to work until the end. My job isn’t that demanding. I wake up in the morning, get myself and the kids ready and out the door for our day.

We park at the bus stop and the bus drops me off a block away from my work. I work in an office where I have my own desk that I sit at for most of the day. When it is time to go home I do the whole commute in reverse, get the kids fed and into bed with the help of my husband, and then I usually crash myself.

I worked right up until my due date when I was pregnant with Cameron. With Gavin, I went on sick leave a couple of months early. Gavin’s pregnancy was hard. I was hit with low iron and low blood pressure and found myself getting dizzy often. I had to drive to work and wasn’t getting much rest and the combination was scary, especially after an incident at the end of my first trimester when I fainted and gave myself a concussion. But going on sick leave early was stressful enough as it was. I didn’t want to do that again if I could help it.

My husband questioned whether I should still be working during this current pregnancy. He even suggested that I might ask my doctor to put me on sick leave. The low iron and low blood pressure came back with a vengeance, and probably the only reason I haven’t fainted is because I’ve paid attention to the signs very carefully and I stop what I’m doing when I feel lightheaded. But I have to do that often.

I explained to my husband that while being off work might sound like a good solution, we would also have to take the kids out of daycare which would make me their sole caregiver during the day. I’d be required to walk up and down the stairs multiple times a day (something that makes me quite dizzy), bend over often, and sometimes even pick them up. It wouldn’t be restful and likely wouldn’t solve any of the issues I’ve been struggling with during the past few months. Working at a desk in an office just sounded better to me.

But then Christmas came.

I was able to take a week and a half off around Christmas and New Year. I spent my 37th and 38th pregnancy week at home with my kids and my husband. And I felt better.

I was shocked at how much better I felt.

I stopped taking my iron daily because I didn’t feel the need for it anymore. My kids started sleeping in so I was able to sleep in. I rested when I felt tired. If I needed to stop doing something, I stopped doing something. I took breaks. Taking the stairs stopped bothering me nearly as much. I even found that “nesting” surge of energy that I’ve been expecting for weeks but had not yet seen. And on top of that, I didn’t have to fend off obnoxious comments about my body all day long.

When I went to my doctor midway through the time off, she commented on how well I was looking. I no longer looked pale. “I think you were pushing yourself too much” she said.

I thought I could do it all. Wake up early, get to work, do my job, be a pregnant Mom… but it has been hard. Very very hard. I’ve been exhausted and uncomfortable and lightheaded and sick and out of sorts. I thought it was just how this pregnancy was progressing. But then I stopped working for a short while and I felt so much better.

My vacation is over now. And I’m not on maternity leave yet. 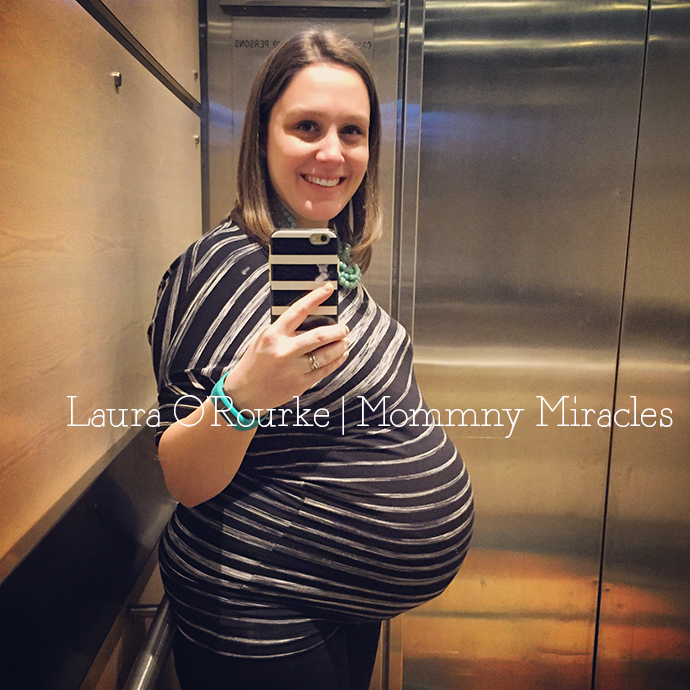 Me, today. At 39 weeks pregnant, on my last Monday before maternity leave. In the elevator.

One more week. It seems so short in the grand scheme of things. Monday, Tuesday, Wednesday, Thursday, Friday and then I am done this chapter of my life for at least a year.

And yet, like everything in pregnancy, I know this week will creep by until I realize that I sped through it.

I know it will be over soon. I know I’m in the home stretch. I know this baby could be here any day now (or any week now). I know that Friday will be here before I know it.

But I want to nap now. Please, just let me nap.

The post Coming Back… Briefly: On My Last Week as a Working Mom appeared first on Mommy Miracles.