Finally! You guys, Community finally gave Shirley a decent storyline – in fact, I think they gave her a GREAT storyline. It was no surprise that last night’s episode of Community, which barely featured my least favorite characters (Britta, Pierce, Chang) was a huge hit with me. I loved both storylines.

I Pity The Foos 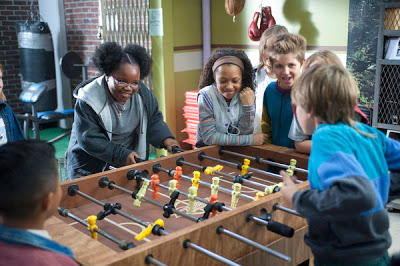 We don’t often get to see Shirley and Jeff interact, a fact that was clearly acknowledged by the show when Pierce wondered “When did those two get so close?” Shirley stepped in to help Jeff try and defeat a group of arrogant, German Foosball-dominating students, and it turned out that she was good. Really damn good. Jeff used to be pretty good himself – Foosball was a great sport to play for a kid who grew up without a dad, and he really enjoyed it until some cruel bully just like those German dudes ruined it for him.

Foosball had been ruined for Shirley too, because it brought out the worst in her – and evil, cruel side. She recounted a tale of beating a kid at the local community center so badly and then taunting him until he actually peed himself. And that kid was a young Jeff Winger.

Shirley was “Big Chedder” and Jeff was “Tinkletown”. It made perfect sense! They’re around the same age and, probably grew up near Greendale. I loved seeing the flashbacks to the incident from both Shirley and Jeff’s perspectives, especially because their experiences as kids were so different from who these characters are now. They fought, of course, and heightening the argument by cutting to an anime sequence and then bringing it back down to calmness was a kind of perfection that only Community can achieve. Instead of lingering on the old conflict, Jeff and Shirley banded together to not beat the German students, but frustrate them – by landing the ball in a spot where it couldn’t be played. And then they left, arm in arm, to see a movie. 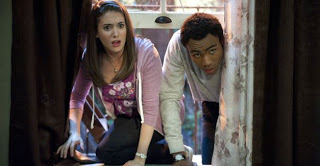 It’s hard to compete with a storyline as strong as Jeff and Shirley’s, but I also loved the Troy/Abed/Annie storyline this week. Annie moving in with the two boys provides a plethora of hilarious situations, and this one began typically enough – when dusting the apartment, Annie accidentally stepped on and broke a super-exclusive Batman DVD the boys had purchased. Annie went to great lengths to cover up her accident by faking a robbery, which Abed blamed on the landlord. (No sign of forced entry.)

Abed as Batman was hilarious, but even more hilarious was Annie doing a Christian Bale voice to see if she could plausibly re-record all the extra behind the scenes commentary. She wasn’t half bad! Something I’ve always loved about Community is how they’re able to use Abed’s character to go a little meta – it doesn’t always work, but when Troy told Annie that she couldn’t fool Abed because he’d seen that scenario play out in dozens of sitcoms, it was a great use of that tactic.

The landlord actually turned out to be a thief of ladies’ shoes, and Abed slowly began to realize that Annie had been the one to break the DVD. I think the fact that he stayed in character as Batman to process that information was very true to his character, because he didn’t know how else to deal with the situation.

For Community lovers, I think this episode was a fantastic example of how Community has managed to maintain its quirkiness while planting its feet a little firmer into reality this season. The storylines themselves weren’t overly bizarre or groundbreaking, but it takes a subtle kind of genius to be able to include both an anime sequence and a prolonged Batman impression into such an episode. This season Community has managed to take normal storylines, like a group of friends getting together for a housewarming party or celebrating Halloween, and turns them into works of art. It’s a shame that we’ll have to wait an indeterminate amount of time before seeing the season conclude.

What did you guys think of “Foosball and Nocturnal Vigilantism”? And of course, here are a few highlights from the episode: