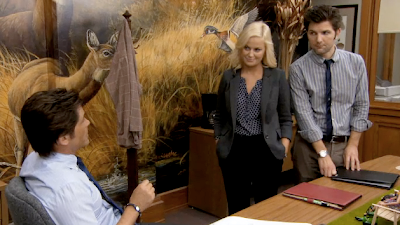 I’d love to start off this review by saying something clever or poignant, but what I really want to say is “Ahhhhhhhhhhh Parks and Recreation is sooooooooo good! I loved this episode! Yayyyyyy!!!!!!!!!” Maybe I should have made a Leslie Knope style video and emailed it to you all.

“The Trial of Leslie Knope” was just that – the ethics trial Chris made Leslie undergo after she and Ben came forward about their relationship. And I thought it was a pitch perfect episode. All the characters were showcased perfectly, and for major Ben/Leslie (Benslie? Ugh) fans like me, it was seriously swoon-worthy.

To avoid losing her job, Leslie had to prove that the only rule she’d broken was Chris’s rule about not dating coworkers – that other than that, there had been no unethical behavior or misconduct. Chris was calling fourteen witnesses to the stand, so Leslie needed her own ammunition – her lovely coworkers, obviously.

Ann had an email and video to verify that Leslie had provided the correct date that the relationship began. Donna confirmed that a motel room the two got when city hall was being fumigated had indeed been set up as an office, and that there were zero signs of anything romantic going on there. Ron confirmed that Leslie came to him at his cabin when she ended the relationship – even though he did everything possible to drown her out when she uttered his address. Tom confirmed that the kiss Chris witnesses between Tom and Leslie had been a total joke. Every accusation Chris lobbed at Leslie was shot down…until he brought in the maintenance worker from Lil Sebastian’s memorial service. The one who Leslie had bribed to keep quiet about her relationship with Ben. Oops!

There were also so many great moments, like April pulling out her favorite old-timey Janet Snakehole theatrics and accusing the court stenographer of being guilty, Andy confessing about taking a laptop home and accidentally getting spaghetti in the keyboard, and Tammy showing up with a few doctored photos and bailing when Chris explained the punishment for lying on the stand. I loved Leslie giving instructions to Andy only to have April accompany him to execute them, and then Donna having to do the same thing with Ron.

When the hearing was over, all Leslie got was a two week, paid suspension. A slap on the wrist. Why? Because Ben, sweet Ben, had taken a private meeting with the board where he took full responsibility for the bribe and resigned. He saved her, because he loves her – that was on record. It was adorable. Even better was when Leslie arrived to meet him, along with the court stenographer, so that her love for him could also be permanently recorded.

Watching Chris try and avoid inevitable depression from the stress of the trial was hilarious – he downed vitamins and pills, got a couple of B12 shots and wouldn’t stop doing jumping jacks, all because what Leslie did hurt him to his core – which is very hard to get to since most of his exercises focus on strengthening his core.

But hands down, the moment that had me howling with laughter the most was the end tag, where it was revealed on the stand that Jerry’s actual name is Gary. His boss got it wrong on his first day on the job and he just went along with it. Seriously, that couldn’t have been more perfect.

As much as I love the sacrifice Ben made for Leslie, where will things go from here? Ben’s not from Pawnee, and will be sticking around only for Leslie. But without a job, that could get difficult. And if Entertainment 720 taught us anything, it’s that the main characters actually need to work together for this workplace sitcom to work – the show improved greatly once Ann started working at City Hall, if you ask me. Luckily, Parks and Rec is such a great show that I have faith that whatever they do, I’ll like it.

What did you guys think of the episode? Did you love it? Here are some other highlights: