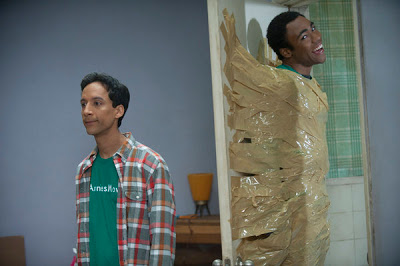 The Community related Twitter feeds were all atwitter (terrible, sorry) yesterday using the #AnniesMove hashtag. And how did that social media takeover (OK, it wasn’t a takeover, almost no one watches Community so an even smaller amount of people care about Community related Twitter feeds) relate to the episode? Well, Annie moved into Troy and Abed’s apartment and they live Tweeted the whole thing. You can see Abed’s tweets here.

Annie moving in with Troy and Abed was set up during the Yahtzee episode, and I’m so glad they actually did it. It made sense, since Annie was living in a terrible neighborhood. Annie, Troy and Abed are also the youngest members of the study group, so they have that going for them as well. But Troy and Abed are so buddy-buddy and in their own little world, and Annie is so Type-A and uptight, there were bound to be problems. The show did a really good job of taking the Trobed quirks we would usually find endearing and making them seem annoying, thus putting us in Annie’s shoes. At first, Annie took Britta’s advice and tried to loosen up and just go with the flow. They used up all the packing tape to adhere Troy to the back of the bathroom door? Sure! No problem! But she lost it when she realized the boys were making her sleep in a blanket fort because they were using a second bedroom as a “Dreamatorium”.

The Dreamatorium was THE BEST. It was just an empty room with a graph painted on all the walls, but it was also a place where any of their dreams could come true. When Abed and Troy realized how upset Annie was, they moved their bunk beds into the blanket fort and gave Annie a bedroom. It turns out they really needed Annie to help them with things like where to put the water in the iron and how to get out Kool-Aid stains. (They already know that it’s not applying the opposite color of Kool-Aid.)

The group was broken up in an interesting way in this episode. Annie was mostly with her new roomies, Troy and Abed. Shirley and Britta were stuck together in a car (Shirley would rather have to engage in a philosophical/religious debate with Britta than hang out with Pierce) and the two most arguably disliked members of the group, Pierce and Jeff, were on their own.

Shirley and Britta were arguing about religion vs. morality and whether Britta, and atheist, could be a moral person when Britta decided to prove her point and pick up a hitchhiker. At first it was a win for Shirley – he said he could see the kindness in their faces and that he assumed they were both Christians. Then it was a win for Britta when he started talking about how God gave people marijuana and it was a good thing…and then he told them he was Jesus. And then it was a win for no one when he started talking about drinking human blood and sang a song called “Don’t do it” about racial mixing. Oops! Out of the car! I like seeing these characters together, but I’m worried that Shirley’s character is being turned into nothing more than a Christian stereotype, and that seems to be at its worst when she interacts with Britta. By making Shirley too judgmental, the show loses the other aspects of her personality. She really is supposed to be sweet and motherly, and I’d like to see a return to that instead of just watching her constantly disapprove of all non-Christians.

Pierce didn’t have much to do this week, but it was still funny – he tried to fix a broken electrical socket in Annie’s apartment so she wouldn’t lose her security deposit and ended up not only ruining the whole place, but almost killing himself by inhaling toxic fumes.

Jeff’s storyline was hilarious this week. He told Annie he was sick and couldn’t help with the move, but really it was all an elaborate ruse so he could spend the day at the mall. He even had the salespeople help him make the store sound like a hospital when Britta called to say she wasn’t buying the story. So things were going great for Jeff, until he ran into Dean Pelton — sorry, Craig. The Dean blackmailed Jeff into spending the whole day at the mall with him, because he knew Jeff was supposed to be helping with the move. (Thanks, Twitter!) He made Jeff order for him at lunch and they recorded a cheesy music video together for “Kiss From a Rose”.

In the end Jeff did show up to help out, but the Dean had Tweeted the karaoke video and the whole gang broke out into “Kiss From a Rose”. And yes, it was hilarious.

Because Annie is one of my favorite characters, and so is Trobed, I was bound to like this episode. But I think the stuff with Jeff and Dean Pelton is what really made it special. I was never a big Chang fan, and it seemed that he’s taken a back seat this season to some hilarious Dean Pelton moments, which I’m totally OK with. What did you guys think of “Studies in Modern Movement”? And of course, check out a few of my favorite quotes and moments and share some of your own.