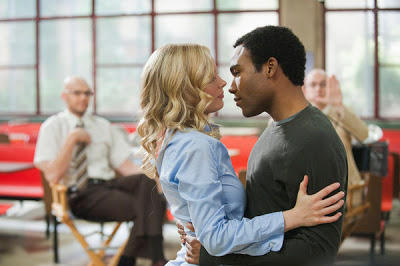 If you’re one of the roughly 1,300 people in the world who are avid Community fans, then you’ve heard about how NBC has pulled the show from their mid-season lineup with vague promises that they’ll air all the episodes eventually and that it doesn’t indicate impending cancellation. You’ve probably also cried out to Occupy NBC in protest. And last night’s episode probably made you hate the thought of being without Community even more.

“Documentary Filmmaking: Redux” was a great example of both why some people love Community and why so few people watch it. It was hilarious, wacky and referenced an earlier episode. But that also makes it difficult for new people to get into – it’s too out there for them. Well, screw them! I loved the episode.

Dean Pelton needed to produce a new commercial for Greendale since the one they were using was incredibly cheesy and 1990s and thus, amazing. Knowing the Dean would crack under the pressure and go crazy, Abed decided to make a Hearts of Darkness style documentary about the process. And crazy the Dean did go, forcing everyone to spend weeks filming the most ridiculous commercial ever. Britta and Troy had to hug over and over and over again, Annie went insane with her job as Script Supervisor, Jeff was playing the Dean which was awesome because he was wearing a bald cap, and Chang was Jeff as the Dean, which meant he had on a dirty blond wig UNDER a bald cap. Genius.

In the end, Abed stepped in and saved the Dean by using his documentary footage to cut together a great commercial for Greendale. It was an unexpectedly sweet and giving end to the episode, because it meant that Abed was aware enough of what was going on to sacrifice objectivity and his own project, and it meant that the episode had a happy ending. Since Community hasn’t done warm and mushy for a while, it was nice to see things actually work out in an exhausted, “I give up” kind of way.

There’s another important thing to note about this episode, and Community in general: there were funny jokes. It’s a funny show, and the episode was filled with jokes that landed. Dean trying to get Shirley to talk “sassy”? (Happy, but slightly threatening.) The Luis Guzman stuff? Annie’s manic insistence that the Dean must be a genius because otherwise that meant she gave weeks of her life up for a lunatic? Pierce’s diva act? It was all great.

What did you guys think of the episode? Will you be sad to go months without Community? And, check out a smattering of my favorite quotes and moments: