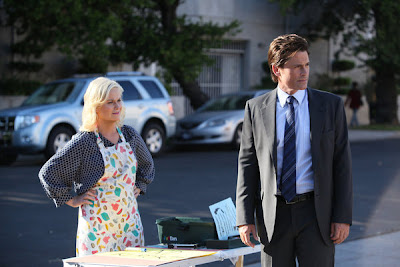 OK, I’ll admit it: I actually audibly squealed during last night’s episode of Parks and Recreation when Ben and Leslie decided scandals be damned and kissed. They’re back together! Things will go crazy! Wheee!

OK, let’s start at the beginning. Leslie was in the process of creating the smallest park in Indiana by converting a patch of concrete that used to house payphones into a tiny green space big enough for one bench. Things were going smoothly, until Ben informed her that after the park was finished he’d cut his time with the parks department down and focus on other departments – it would be their last project together. So naturally, Leslie did everything in her power to delay the project’s completion so they could spend as much time as possible together. Basically, she steamrolled him.

That’s an aspect of Leslie’s personality I can relate to. Basically, it comes down to being stubborn. And I know I’m stubborn. So watching Leslie try and force Ben into hanging out with her, even when it wasn’t what he wanted, was something I totally got. But it’s not always the healthiest and nicest way to behave. Once Ann told Leslie that she was like that, Leslie realized she owed Ben an apology.

She met Ben at the tiny park and told him she wouldn’t steamroll him into being around her anymore, and if he wanted to cut off contact with her then he could. But – BUT! – that it kills her to not be with him, and she wanted them to be together despite Chris’s rules, despite her campaign, despite everything. And then! And then they kissed! In the tiny park! It was amazing and romantic and yaaaaayyy!

Meanwhile, Tom and Jerry were assigned the task of choosing a new font and logo for the parks department – a task pretty much meant for L-A at Fashionable People, Questionable Things. Tom, of course, was going way over the top by designing Sopranos-style text and a community center that looked like an Apple store, and Jerry, of course, was insisting that the only way to deal with a government job was to do everything exactly the same way, always. He was even used his original ID card from over thirty years ago. And that’s what gave Tom the idea – retro branding! (Please tell me that a 70s style Parks and Recreation T-shirt will be available for purchase on the NBC website in time for Christmas? Please?)

The last subplot was the funniest – Andy decided to take one college course to better himself, so he went course “shopping” with April. They tried out a bunch of classes along with Ron, who was there to support Andy. They bailed on Guitar for Beginners because it was too easy (“Goodbye, everybody! I was secretly an undercover rock star this whole time!”) and on a class about lasers because the prof wasn’t even using a laser-pointer for the lecture. (Seriously? Lame-o, professor. Lame-o.) It went well until Andy found out how much a college class costs and then Ron told him – and this really warmed my tiny black heart, you guys – that he’d won the Ron Swanson Scholarship! It was pretty adorable, and I loved seeing Andy try to engage in debate in some kind of feminist philosophy class.

All in all, it was a fantastic episode of Parks and Recreation, both in the number of hilarious jokes it delivered and the kiss between Leslie and Ben. What did you guys think of “Smallest Park”?

A few favorite lines and moments: