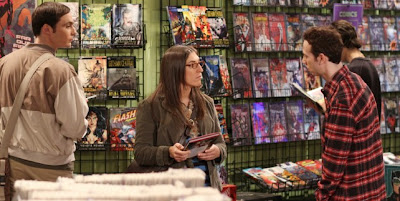 Sigh.
Now, y’all know I love me some Amy Farrah Fowler. But I have to say, I was never really into the idea of her actually dating Sheldon. In fact, I much preferred the idea of Amy dating Stuart from the comic book shop while Sheldon looked on with a confused mix of jealousy, annoyance and disgust. Sheldon just isn’t meant for romantic relationships, and I feel like “The Flaming Spittoon Acquisition” pushed him too far out of his character.

When Stuart first asked Sheldon if it was cool to ask Amy out on a date Sheldon said he didn’t care, but after finding out that Amy had accepted he halfheartedly asked Penny out as a form of revenge. When that failed, Sheldon approached Amy with a proposition: “With the understanding that nothing changes whatsoever, physical or otherwise, I would not object to us no longer characterizing you as not my girlfriend.”

Of course, the show has been heading here for some time now. A key difference between Amy and Sheldon has always been that she’s more interesting in both friendships and relationships than he is. Their negotiations over how Sheldon would comfort Amy when Penny and Bernadette hurt her feelings a couple weeks ago pushed them even further into the dating realm. It had long been acknowledged that they were kinda-sorta-almost dating, as dating as Sheldon could get.

Which is why I was way more interested in seeing Amy date Stuart, a guy who would actually treat her like a girlfriend and not a business partner or stand-in mother. Because of that, this just wasn’t my favorite episode of The Big bang Theory from an otherwise strong season. Here are some jokes I liked though: