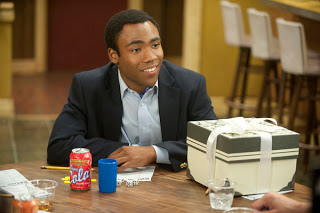 You guys, I can’t believe I’ve been doing fancy parties wrong all these years! No one ever told me it meant setting a bowl of olives near the toilet. Damn. I’ve been putting maraschino cherries there all along, like some kind of classless tramp.

Was last night’s episode of Community the best ever? I’m not sure since there are so many greats to choose from, but “Remedial Chaos Theory” is definitely in the hall of fame.

Troy and Abed had a housewarming party for their new apartment, and it was everything you could have hoped for and more. They took etiquette tips from a 1960s book that instructed them to avoid “touchy subjects like the Negro problem”, ordered pizza instead of serving Shirley’s homemade ketchup and cream cheese monstrosity, and rallied everyone together for a game of Yahtzee! I especially liked that Abed secured the date in Jeff’s calendar by sending him a fancy Photoshop-made invitation to a hip new club called the “Single Malt Platinum Boobs and Billiards Club.”

And the apartment itself? It screamed Trobed, from their mahogany bunk-beds to their to-scale replica of the rolling boulder scene from Raiders of the Lost Ark, complete with actual rolling boulder. Things were going swimmingly until the pizza arrived, and Jeff decided to roll a die to see who would have to be the sucker to go downstairs and get it. As Abed pointed out, that meant creating six different timelines for the rest of the evening.

Timeline One – Annie’s Got A Gun

First we saw Annie get the pizza. There were a few things that were constants throughout most of the timelines – Britta tried to sing “Roxanne” and Jeff cut her off, and then smokes a joint in Troy and Abed’s bathroom, Jeff hit his head on the ceiling fan, Shirley was obsessed with baking, Pierce launched into a story about having sex with Eartha Kitt in an airplane bathroom.

In this timeline, we saw that Annie carries a gun in her purse because she lives in such a bad neighborhood.

Timeline Two – Dr. Pentfield, it smells like burnt pie (That one’s for the Canadians)

Next we saw Shirley go get the pizzas, which gave the gang the opportunity to discuss boycotting her baking. They let her pies burn and really hurt her feelings – especially Jeff, who sneered “You’re not allowed to have baking things as an identity.” Um, is that really the reason they didn’t want the pie? Not because it tastes bad or something? Let’s just say I have never unfriended someone on Facebook for baking too much.


Also in this timeline, Pierce presented Troy with a passive-aggressive housewarming gift – a creepy, ugly troll statue that haunted Troy’s nightmares when he lived with Pierce.

Next we saw Pierce go get the pizza, while Jeff mocked Troy for having bunk beds and being childish. Troy stormed into the bathroom where Britta was smoking a joint – she said it was a cigarette, and Troy was cool with that. “I know what you were doing. I’m 21 years old. I’m a man,” he told her, and then pulled out his own cigarette case filled with…candy cigarettes. Troy and Britta shared an intimate moment while he complained about how Jeff demeans him and she told him it’s because he’s a threat now.

In this Roxanne-less timeline, Britta went to get the pizza while Annie tended to Jeff’s injured head and Pierce terrorized Troy with the troll. Britta returned, high as a kite and in love with the pizza guy. (I think she was the only one who didn’t return with something negative to say about the poor pizza guy.)

This was by far my favorite timeline, even though it was the evil one. Troy headed downstairs to get the pizza as quickly as possible “so I don’t miss anything” and EVERYTHING ended up happening. He wasn’t there to grab the Indiana Jones boulder before it hit the ground, so the s— hit the fan. The boulder hit the floor, Jeff hit his head, Annie slipped on the boulder and spilled Pierce’s scary Serbian rum, Annie’s purse falls and the gun inside shoots Pierce in the leg, Britta drops her joint which falls into the rum and explodes into flames, and Troy returns to his ruined apartment and, naturally, blames the scary scary troll.

Abed went to get the pizza this time, and at first it seemed like things were going well. Britta was incredibly high and was therefore hungry for Shirley’s pie. Troy told Pierce he was thankful that Pierce had let him live in his mansion for a while, but now it was time for him to spread his wings and fly – or, you know, something like that. And Jeff and Annie kissed as she tended to his ceiling fan induced head wound.

And then it all went to hell. Britta told Shirley that she was high, and worse that the group had all agreed not to eat any of her baking – and Shirley called her a drug addict. Pierce regretted his passive-aggressive gift after Troy’s touching words, but Troy grabbed the box and discovered the evil troll. And mid-kiss Annie thought about her dad and totally killed the moment between her and Jeff. Poor Abed returned to everyone fighting.

And what was all this meant to signify? Well, when Abed caught the die in the air and called Jeff out on his scheme – by using a six-sided die to decide who would get the pizza, Jeff had found a way to ensure he himself wouldn’t have to go, as the seventh person –  the group decided that as punishment Jeff should have to go get the pizza.

So what happened without Jeff there? Britta broke into “Roxanne” and started dancing with Shirley, who was taking her pies out of the oven, and pretty soon everyone had joined in. It was the only timeline that ended happily – with Jeff out of the picture, everyone could relax and have fun. So what does that say about him?

Of course, Community couldn’t end on that bittersweet note – too conventional! (I mean that as a compliment.) Instead, we got to see some of the aftermath of Timeline Five – the disastrous one. Shirley was hitting the bottle pretty hard, Britta put a blue streak in her hair, Annie had to be committed (again), Troy had a weird voice thingy going on after losing his larynx after trying to eat the flaming evil troll, and Jeff lost an arm! Oh, and was Pierce dead? Pierce was dead. Abed seemed fine though, and suggested since this was obviously the most evil of all the timelines they should put on fake black goatees (like evil people have) and find their way back to the “prime timelines” (Annie getting the pizza) and assume their identities, because that’s what evil people would do. Follow that?

Of course, Community also didn’t end on that glum moment – we were treated to one final scene of Troy and Abed watching a movie in their pajamas. So what did you guys think of this episode? Did it work for you? What was your favorite timeline? And check out a few of my favorite quotes and moments from the episode: