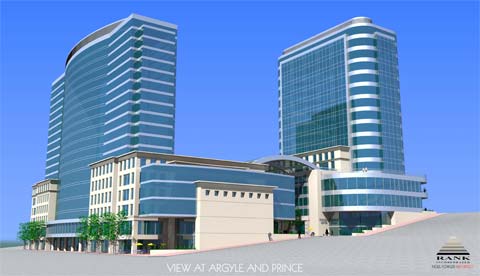 "We want to make sure all Nova Scotians are well informed about this potential development," said Transportation and Infrastructure Renewal Minister Bill Estabrooks. "While we have not made a decision about the project, we are exploring the development of a new convention centre as an economic engine to create good jobs and grow the provincial economy."

A new convention centre is expected to create about 12,000 jobs and generate more than $40 million in provincial tax revenues during the first 10 years of operation.

One conference of 1,000 delegates can inject $1 million in new spending into the provincial economy, with each national delegate spending about $1,600 per visit.

The proposal states that it would cost $159 million to build the convention centre, and $2.9 million annually for facility maintenance and updates. Funding from both the federal and municipal governments will be required for the project to move forward.

The province has also completed a shadow bid that compares the developer's proposed price to the cost of the province building a new, stand alone, convention centre. The shadow bid shows that the developer can build a new centre for almost $90 less per square foot, $26 million less overall.

The proposed convention centre design complies with HRM By Design and does not impinge on protected view planes from Citadel Hill.  It would also be built to the highest environmental standards. The developer would be responsible for cost overruns during construction.

The current centre has lost business over the years because of space limitations. This trend is expected to continue as competing centres are built or expand.

A decision on whether the project will proceed is expected later this year.

Highlights from the developer's proposal and other information about the proposed convention centre can be viewed on-line at www.conventioncentreinfo.com . The public can also submit comments on the website.