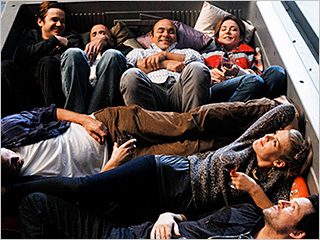 I’m so glad I  started watching Cougar Town, even though I’m not sure it’s a great show to blog about. Cougar Town is funny – really funny – but there isn’t much plot to it. It’s just a bunch of wacky people who barely work and drink a lot of wine hanging out. And that’s what makes it awesome.

So last night’s episode was really great because everyone was hanging out…and playing the classic childhood game of Sardines. I like episodes of Cougar Town when a group of characters recognize the flaws in one particular character and gang up on them. Ellie iss mean, Jules is controlling, Laurie is trashy, Bobby is more trashy, Grayson is cold-hearted. Each character has something that can be picked on, but the cul-de-sac crew always gangs up on each other in the most warmhearted way possible. So last night, everyone hid from Jules during her Sardines game as a way to rag on her for always needing to get her way.

I particularly liked the stuff between Andy and Grayson. Grayson tied him to a tree! That is just fantastic. And Laurie and Bobby stealing Grayson’s champagne and steak was also pretty great.

The episode was full of great gags and jokes (Ellie buying a truck?! Everyone, including Bobby’s new girlfriend, crammed into the back of the truck?) and of course ended up with the whole gang being friends again. And the new knowledge that Jules really sucks at finding people. Now it’s time for me to go let out my best trucker “Woo-hoo!”, play a round of penny can, sip some wine, pull a Friend Test on someone I know and pretend I’m part of the crew.