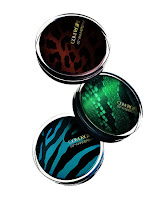 I bet you have seen pictures of these compacts with awesome packaging before. When Cover Girl tweeted/ FB’ed about their African-inspired Anniversary CLEAN compacts, I kept hoping we’d see them around here soon. The other night, I saw this post on I Colour Outside the Lines, went and called up the SA at my Shoppers (whom I know so well by now cause I go there too often, lol) right away. He confirmed they just got the display in.

On top of that, all last week, up until Friday, Shoppers celebrated 50 years of Cover Girl by offering x50 points with $25 Cover Girl purchase. You know what I was going to say, right? Double promos!!!

Sorry that the promo was over already, but if you are interested in getting these, Shoppers is running x20 points today or $10 gift card promos for the rest of the week. 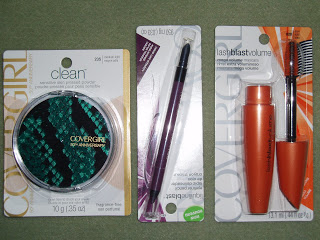 I wanted to get all 3 patterns, but unfortunately we only gets 2 around here, no blue zebra prints at all. I confirmed this at Shoppers and Lawtons where I saw the display.

And not only that, there were only selected shades with these packaging, and you would be lucky to find one that matches your skin tone. Most are on the light side, I got the green snake-like print, for sensitive skin in the darkest shade there was, 235 Medium Light. It was CAD8.99 this week.

Additional items to get to the promo limit: Cover Girl LiquilineBlast in Violet Voltage, CAD8.99 and Cover Girl LashBlast Volume in Blue, CAD8.99. It might sound funny but I didn’t know the LashBlast mascaras come in any other colours than black and brown, until now. Thought it might be fun to try a blue one.

Hope your weekend is going well. I passed out a few hours this afternoon, was just so tired for some reason. I might sleep through the long weekend coming up too, lol.