I’m sitting here drinking a latte, in part because I like writing with a hot drink in my hands. The other part is that it is nighttime and I haven’t been able to keep my eyes open past 9pm lately, which is a really inconvenient pregnancy symptom when you’re trying to balance a full time job, family life, and everything else.

And look at the time: Already it is an hour past that time when my eyes are typically shut and my mind is drifting. So, late hour latte it is.

I should clarify. What I’m drinking isn’t really a latte. The once-barista in me wants me to explain that what I’m drinking is a café au lait, a drink comprised of half coffee and half steamed milk. It really is the closest thing to a café-brewed latte when one does not have an espresso maker at home.

And I suppose I should also be clear that my lovely drink isn’t really made with steamed milk. It has been made with the new Silk Creamy Cashew. (Think Almond Milk but with cashews instead. And it is creamier. And more delicious).

I admit I’ve never really been a real big fan of the nut-milks. We tried to jump on board the Almond Milk train a while back but quickly reverted back to dairy milk. As someone who is mildly lactose intolerant, that probably wasn’t a good decision. So when Silk recently released Creamy Cashew Milk in Canada, I decided to try it. 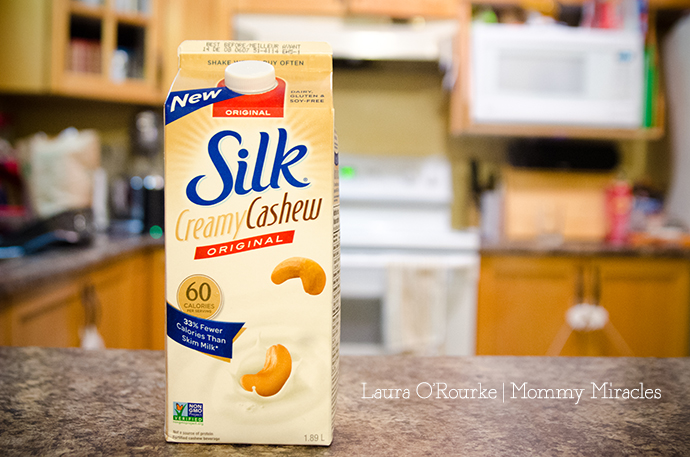 I admit to literally being shocked at how much I liked the Silk Original Creamy Cashew Milk. It absolutely lived up to its “creamy” name and the texture was more like one of those bottled milkshakes you can get at the corner store. It was smooth and thick and just sweet enough. In fact, I would choose to drink a cup of Cashew Milk over cow’s milk any day.

Silk Creamy Cashew has as much calcium as dairy milk but only 60 calories per serving, which is 33% less calories than skim milk, and it is an excellent source of calcium and vitamin D. I’ve been told to watch my sugar intake during this pregnancy too, and I am thrilled to notice that Silk Original Creamy Cashew has less sugar than a cup of skim milk.

So tonight, when I sat down in front of my computer for a bit of writing, I decided to try steaming up the Cashew Milk instead of my regular milk. I’ve been told that cashew milk can replace milk in all kinds of different ways, and I was impressed by how well it frothed up and how creamy it made my late-night latte, (or my café au cajou if we’re going to get all French about it).

So here’s how to have what I’m drinking tonight: 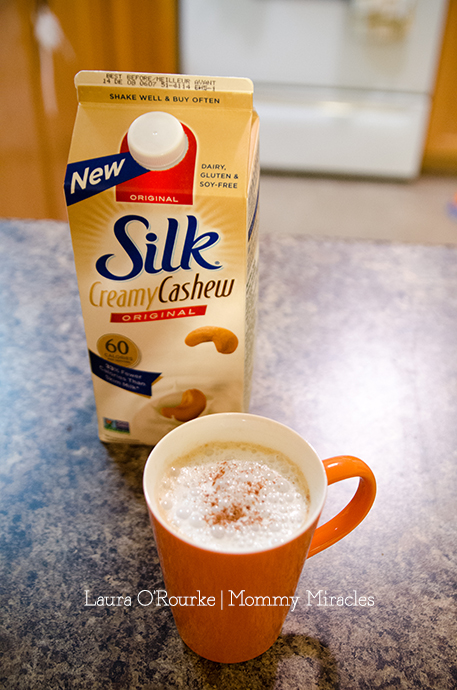 Check out Silk’s Facebook page to get more ideas on how to enjoy New Silk Creamy Cashew.

This is a sponsored conversation written by me on behalf of Silk. The opinions and text are all mine.