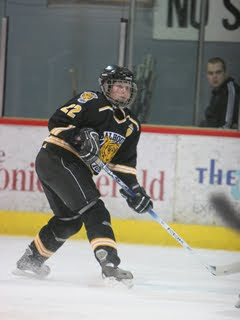 Women’s Hockey Gets Big Win at Home
The Dalhousie Tigers gained a huge confidence building win over one of the top teams in the AUS women’s conference on Friday night at the Memorial Arena. The tilt can be seen on ssncanada.ca. http://www.ssncanada.ca/game/603/
The Tigers defeated Saint Francis Xavier 4-3 in a game that featured a plethora of thrills, goals, and physicality. It was the Tigers second win of the season giving them 4 points in the early stages of the conference schedule.
Last year’s leading scorer and third year forward, Jocelyn Leblanc, lead the way with 1 goal, 1 assist and stellar two way play en route to garnering player of the game honours for Dalhousie.
Carolyn Campbell scored 2 goals and was named player of the game for the X-Women.
The Tigers pounced on the X-Women early in the second period with two goals, but X pushed back later in the period with two markers of their own to draw within a goal. Despite a valiant and desperate effort in the third period, the X-Women could not get the equalizer.
Two days later the Tigers lost a heartbreaker at Saint Mary’s. The Huskies would get the game winning goal on the power play by Kyla Thurston with 1:17 left in the third period.
The Tigers will take a 2-2 record to Moncton for a game the 2009 AUS Champs on Friday night.
Men’s Hockey Still Winless
Pete Belliveau spent the entire summer on planes, trains, and automobiles to try and rebuild the Dalhousie Tigers men’s hockey team. The second year coach brought in nearly a dozen new recruits in an attempt to turn around a program that has been the worst in Canada over the past 6 years.
So far it’s been the same old Tigers.
Dalhousie lost 2 games in New Brunswick, 4-2 to Moncton, then a shellacking to the St. Thomas
Tommies, 9-3.
Goals have been hard to come by for the Tigers. After 4 games the team has scored a total of 9 and are still searching for their first win of the season.
Patrick Sweeney, Jordan Gagne, and Francois Gauthier lead the team with 3 points each. Daniel Bartek has 13 shots on goal but has only managed to put one puck in the net.
First year goaltender Bobby Nadeau allowed 5 goals in 30 minutes in a relief effort vs St. Thomas. Asides from that dismal outing, Nadeau has been stellar and has kept the Tigers in contention in several games. Nadeu has faced the most shots in the AUS so far this season.
As Belliveau’s talented recruits learn how to come together and play winning hockey, Nadeau should get used to seeing a lot of pucks.
This weekend the Tigers will try to get their first win as they host two games that can be seen on ssncanada.ca. The Moncton Blue Eagles come to town on Friday night for a 7:00 match up, while the Tigers will look for revenge against St.Thomas on Saturday at 2:00.