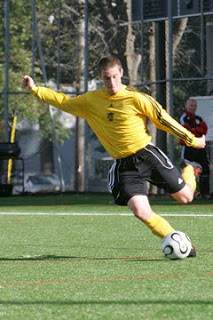 Hockey Tigers Get First Win
Pete Belliveau’s Dalhousie Tigers men’s hockey team got their first conference win this past Friday night at the Dalhousie Memorial Arena. The Tigers withstood a late rally from the Moncton Blue Eagles to win 6-4.
The Tigers have 11 fresh faces on this year’s rebuilding squad, but it was a familiar face that led the way in this contest.
Captain and 4th year senior Jeff Larsh scored a hat trick to pace the Tigers, his third marker coming at the midway point of the second period.
Larsh’s first goal came 30 seconds into the game and was followed a minute later by a highlight goal from Kenzie Sheppard. A streaking Sheppard took a long pass from Ben Van Lare and scored on the breakaway with a nifty backhanded move.
Trevor Mackenzie also scored for the Tigers and Ronald Kelly added an empty netter to put the game away late in the third period.
Dean Ouellet scored a goal and added an assist to garner player of the game honours for Moncton. Bobby Nadeau stopped 33 shots for the Tigers to get his first victory of his university career, after playing 5 years in the QMJHL.
The next afternoon at the arena, the Tigers played the St.Thomas Tommies to a standstill after 70 minutes of regulation and overtime, but lost in the shootout.
Dartmouth’s Cory Banfield returned to the HRM as a Tommie and scored the game winning shootout goal. Banfield also scored in the first period on route to being named player of the game.
Patrick Sweeney led the Tigers with 2 assists. Ronald Kelly added a goal and registered a stellar two way performance to spark a Tigers comeback late in the third. Trailing 3-1, the Tigers scored 2 goals to force overtime and ensure themselves of at least a point in the standings.
The Tigers are now 1-3-2 and are tied for last place with Moncton. The Tigers have shown strength at the Memorial Arena, now 1-0-2 after 3 home games.
Dalhousie plays Acadia Wednesday night in Wolfville, and then come home for a pair of weekend games, vs. PEI on Friday night, and the UNB Varsity Reds on Saturday night. Both games start at 7:00 and can be seen live on ssncanada.ca.
AUS Soccer Championships at Dalhousie
The reigning AUS Champion Dalhousie Tigers men’s soccer team will play host for the 2009 championships. The Tigers will be the number 2 seed and play their first game on Saturday at 3:00 vs. the highest remaining seed from Friday’s quarter finals. The Cape Breton Capers are the tournament’s top seed and will play the lowest remaining seed on Saturday at noon.
#3 UNB plays #6 Moncton at Noon on Friday, followed by #4 UPEI vs. #5 St Francis Xavier.
Weather is expected to be a major factor for Friday’s games. The forecast is calling for heavy rains and cool temperatures. Saturday’s games should see crisp but clear weather, while Sunday’s final is expected to be a beautiful day.
Tigers Head Coach Pat Nearing was a guest on CKDU Sports this past Tuesday. Nearing said that the flu epidemic will probably be a bigger storyline than the weather. The Tigers have had players miss time the last couple of weeks due to illness, and he thinks the other teams are in the same boat.
If the Tigers make it to the final vs. Cape Breton, coach Nearing hopes to take advantage of the Capers attacking style. “(The Capers) are quick. Their whole team has an attacking mentality,” said Nearing. “They come at you in waves and it could create some opportunities for counter attack, a chance for one on one with our strikers. If that happens, I fancy our chances.”
Nearing also added that when the Tigers lost to Cape Breton in Sydney, they were without the services of starting strikers Hamzeh Afani and Michel Daoust-Wheatley.
Finally, Nearing warned fans not to book Cape Breton and Dalhousie as automatic participants in Sunday’s final. “The AUS is so tight and soccer is the cruellest of sports,” said Nearing. “It’s a game of upsets, affected by weather, surface….you could dominate a game from start to finish and lose 1-0.”
The entire tournament will be shown on ssncanada.ca. Join me and Matt Fegan at 12:00 on Friday for the first game of the 2009 championships.

Notes and Observations
Despite the Halifax Mooseheads horrible record, and the fact they are a bad hockey team, I’ve written on several occasions that, at the very least, they play hard and give it everything they have. Which is why I was so disappointed to read on Friday morning several Mooseheads players saying they came out flat and unprepared for their loss to Montreal on Thursday night at the Metro Centre. When you are 1-17-1, how do you possibly come out flat for a home game vs. a mediocre team? You’d think they would have been geared up for a possible win, considering there may only be 8-10 wins on the table for the rebuilding squad this year…..Does the Blue Jays announcement to keep Cito Gaston as manager 1 more season before turning him into a consultant seem strange to anyone else? What good does this do for the organization? Make him a consultant now and let the new GM hire a new manager. What can Cito do for the Jays in 2010 besides mismanage his pitching staff and inspire absolutely no one to do any more than the bare minimum……Watching Pedro Martinez pitch with a mid-eighties fastball and a beer gut is fun. A stark contrast to the days when he was a fire-baller with the Sox and looked about 140 pounds soaking wet. But the guy can still pitch, although, as I write this, Matsui just took him deep in game 6 (“who’s your daddy?”)….AUS basketball starts this weekend. The Tigers play UNB on Friday night while the Huskies have a tough 2 game set in Cape Breton. The women’s games will be very interesting with the defending champion Capers hosting the new and improved Huskies with their highly touted recruiting class…..the Acadia Axemen walking into Antigonish this weekend and beating the X-Men in the AUS Football semi-final would be akin to the Miracle on Ice in 1980, when a gutsy bunch of Americans led by Ken Morrow beat the Soviet Union. Even if Acadia manages to hang tough with the X-Men, the Gary Waterman “love in” on campus could come to a crashing halt. But it’s not going to happen. X wins by 21 points at least…..The Dalhousie Tigers women’s basketball team could be in for a rough November. After looking very unimpressive in pre-season, the Tigers have a tough first term conference schedule featuring games against MUN, CBU, and X. The Tigers are desperate for Alex Legge to return, but she won’t be back until January. Until then the team’s youthful backcourt will have its hands full with some very physical and experienced opponents.