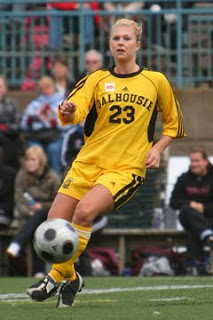 “They’re not being thrown into the fire,” says Hutchison. “The recruits coming in this year will really have the benefit of not being pressured into major minutes.”
They do give the Tigers a bit more versatility. Hutchison describes Cayer, of Missasauga, Ontario, as an attacking specialist. Her presence will allow strikers Kate MacDonald and Katie Richard more space.

“If we score 30 goals, it’s not going to be three players scoring ten goals each, I think you’re going to see six people scoring five goals. You can stop one, maybe two people on our team, but there’s two or three others who are more than willing to put the ball in the back of the net.”

Players like Cayer and Janiska are likely a year or so away, but will give the Tigers diversity for now.

“What we’ve looked for in our recruiting are people who have the ability to play with the ball at their feet–people who can knock the ball around.

The group lacks any transfer players, although the Tigers do have four capable fifth year players already in their system.

“What’s promising from a coaching perspective is that we have the nucleus of the team back next year, plus we feel, with the people coming in, the standard is higher than it has been in the past. Everybody will have to work harder to keep the position they had and the time on the field they had. It should force everybody to be better.”

Hutchison says he’s recruiting for 2011, when the Tigers will be without MacDonald, Richard, and Jeanette Huck.

“We’re recruiting this year for next year…. The recruits can come in with a much more relaxed adjustment and initiation into the AUS.”

Hutchison says that strategy avoids panic recruitment. They have time to scout and properly develop players.

Greig is coming off knee surgery she underwent last December. Hutchison says she should be ready, although some players can take up to two years to fully recover from a knee injury.

Dylan Matthias is the incoming sports editor at the Dalhousie Gazette. He runs Dal Soccer Live on the side to provide more in-depth coverage of AUS and ACAA soccer. He has been a Toronto FC fan since Danny Dichio scored the team’s first ever goal. It showed him the magic of soccer.