The Dartmouth Pizza Quest is now 3/5ths complete! Check out the Downtown Dartmouth Quest and the Cole Harbour Quest if you’re not up to date.

And don’t forget to vote for me in The Coast’s Best of Halifax Awards for Best Food Blogger!

Much thanks to Meghan and Matthew, our lovely Eastern Passage hosts!

The core pizza team was back in action: Denton Froese, Halifax ReTales, LA Doomguts and myself.

Anne, one of our hosts from Downtown Dartmouth, also joined us for the occasion.

We ordered medium pizzas with pepperoni, bacon, green pepper and mushrooms from these places:

These pizzas were scored for sauce, crust, cheese, toppings and overall. Each participant was also asked to name their top 3 picks, and declare their favourite. All of this information was analyzed in order to determine the top 3 pizzerias in Woodside/Eastern Passage. 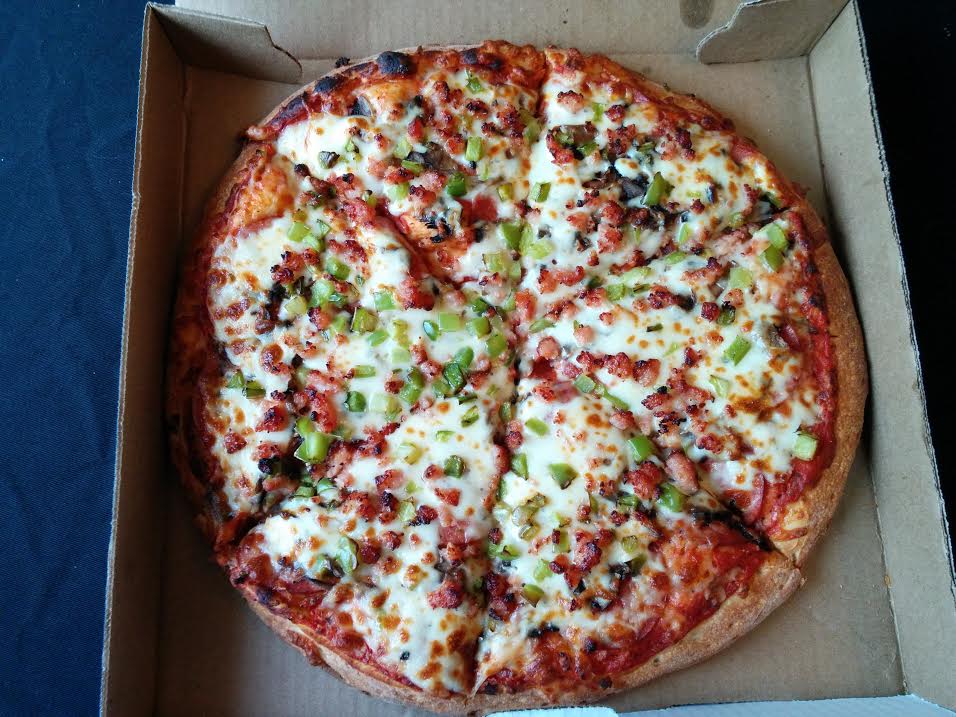 This was my first encounter with Jessy’s Pizza. Originally I excluded it from the quest based on a # of locations technicality, but after Alexandra’s poor performance in the Cole Harbour Quest I decided to shake things up a bit and give Jessy’s a chance.

My first impression was that this was a very balanced pizza. Everything was very proportionate and structured. There was a decent amount of cheese, too.

This pizza scored lowish marks for sauce, crust and toppings.

We could see that there were veggies on the pizza, but we couldn’t taste them. There wasn’t enough sauce, and the crust was underwhelming.

“Well put together buut boring. Everything was ‘okay’… nothing weak, nothing excelled.. loss for words” – Matt 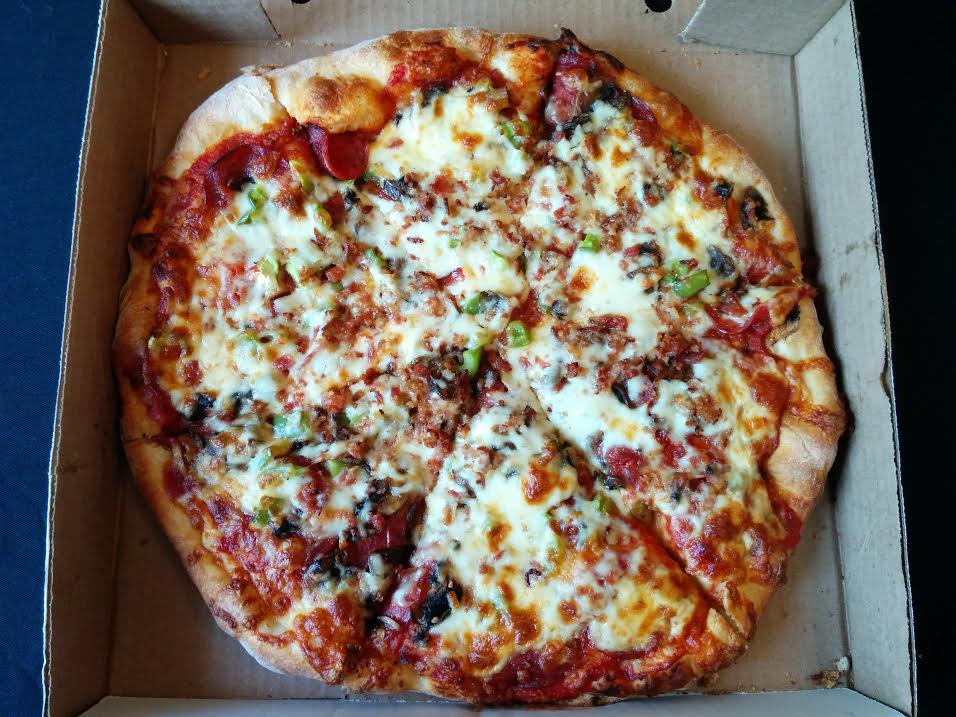 This pizza scored good marks for sauce and toppings.

“Lots of meat, even if the vegetables are subdued” – Denton

I noticed lots of bacon flavour and instances of double pepperoni layers. But Denton’s right about the veggies.

The sauce was on the sweet side and in good amount.

ReTales found this pizza to be a “dullard” and LA was critical of the personality underneath the sexy pizza exterior. 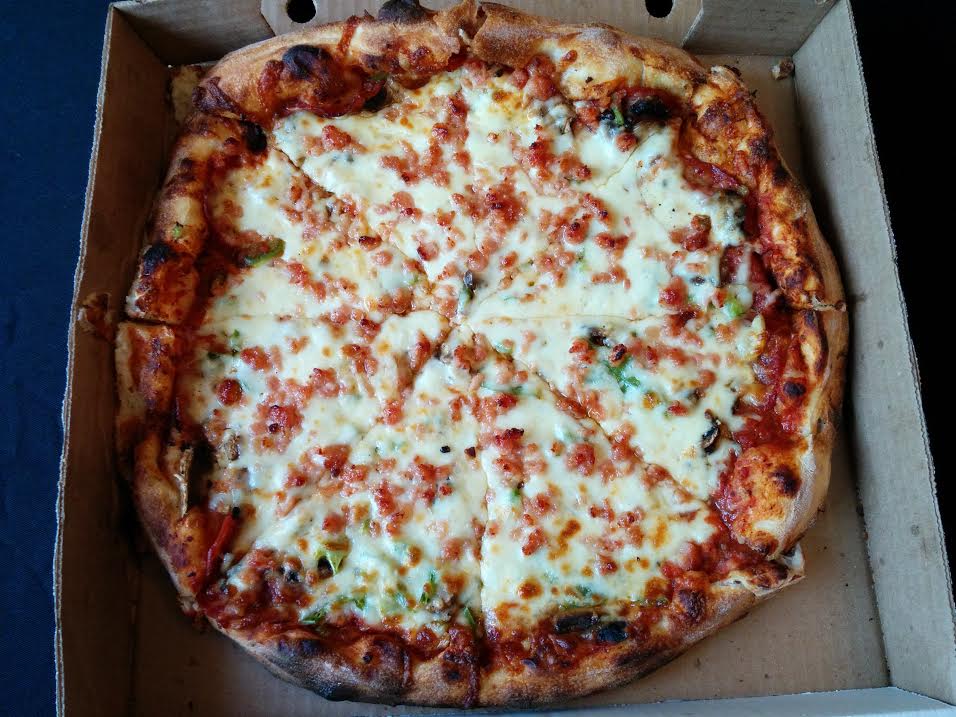 “Consistently good on all aspects, comes together for a great tasting whole” – Anne

Pizza Time scored first place for Sauce and Cheese, and tied for Crust.

This is a big ‘ol cheesy pizza with a tangy spicy sauce. The crust was fluffy, yet crunchy with a few char bubbles. Denton felt that it had a “dry weak crust, almost slightly burnt?” – but it still made his top 3.

The bottom crust was actually quite thin – not too doughy, and worked well with the tasty sauce and thick layer of cheese.

“While not the best pizza ever, there is a simple pleasure to it” – ReTales 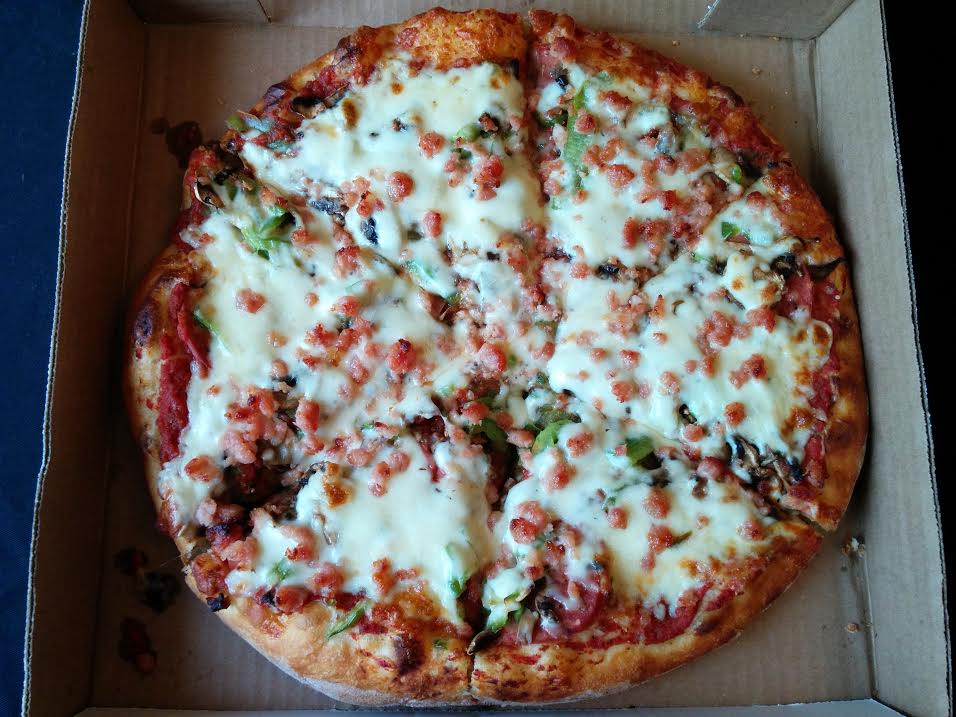 “A very hefty pizza loaded with ingredients and cheese” – Denton

This pizza performed well in the Crust and Cheese categories.

When I picked up the box, it was noticeably heavier than the other pizzas. There was lots of crust and cheese to be had!

Unlike Pizza Time, this crust remained thick and poofy throughout its diameter. Matthew really likes this kind of crust, so Passage Pizza ended up being his #1 pick. Unfortunately our other host, Meghan, passionately hated this pizza, writing:

Three people selected Passage Pizza as being in their Top 3.

The sauce was one of the culprits in this ordeal. Whereas ReTales thought it had a fresh tomato flavour, Denton and I found it tinny.

The group was very divided over the merits of this pizza. 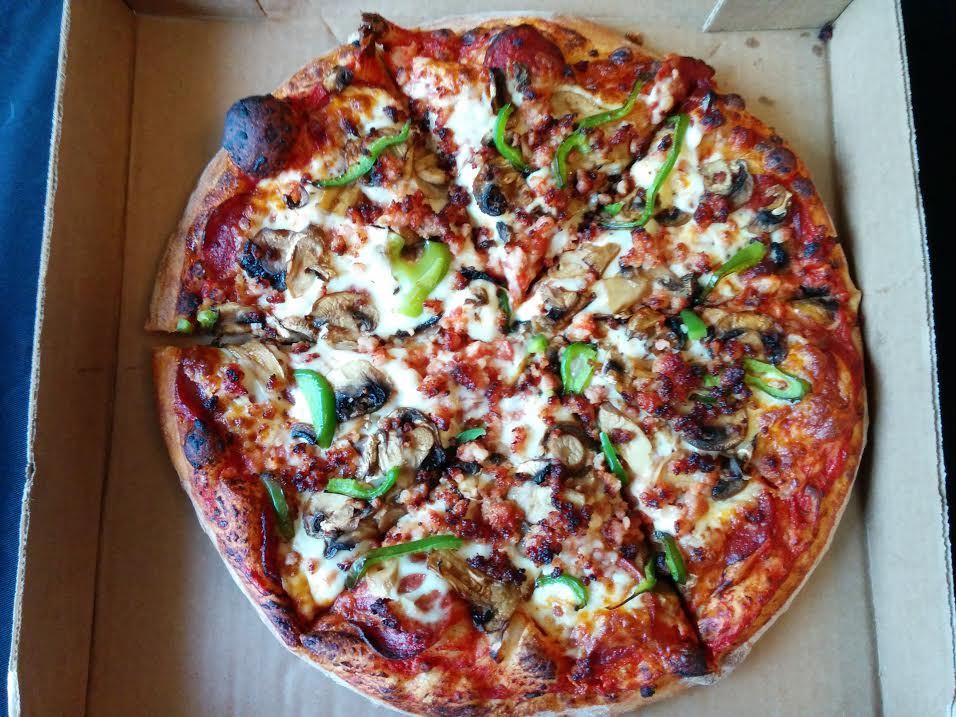 Shannon Dough scored big points for Toppings and Crust and barely squeezed out a 3rd place finish for Sauce.

As you can see, this is a toppings-on-top kinda pie. I could actually taste the mushrooms! Meghan also made note of the nicely toasted bacon bits.

And yet – ReTales, a fellow veggie lover, declared that there was “not a lot of veg, mostly bacon”. I guess on closer inspection this pizza isn’t as veggielicious as Caldwell or Downtown Pizza on our previous quests.

People felt that there wasn’t enough cheese on this pizza, and the crust received mixed reviews.

With all that said – Shannon Dough scored 3nd place for crust, trailing behind the 1st place tie by 1/2 a point.

As for the sauce:  “…could use more flavour, and more sauce needed” – Anne

Pizza Time takes the lead with its great combination of crust, cheesiness and tasty sauce.

In the post-analysis discussion I was very surprised to learn that several people were partial to Passage Pizza and that it was even Matthew’s #1 pick! I thought that it might make the Top 3 but those who didn’t like it really didn’t like it, which kept the scores low.

Shannon Dough was the toppings-forward pizza of the quest, but in ReTales’ opinion it would trail behind Caldwell and Downtown Pizza in a battle royale.

“Are they afraid of veggies in the Passage?”, he wrote on the top of his rating sheet.

My top pick was Pizza Time, and this was definitely a popular pizza among the team. At the same time, this was one of the less unanimous quests.

We’ve got two more Dartmouth neighbourhoods to go – East Dartmouth and North End Dartmouth. We are still looking for a host for East Dartmouth, so if you’d like to be a part of the pizza quest hit me up on social media or shoot me an e-mail at shipwrekkt@gmail.com