Greetings, Dartmouthian!
It’s me, Huxley. It’s been way too long since I’ve last checked in with you!
Lots of great things have been happening here at the gallery. We just concluded Lee Cripps’ fantastic exhibit Self ef-FACE, which was inspired by online selfies.

Yesterday we had two brand new shows open. The first is from Anna Fiander, who just graduated from NSCAD in May. Anna has put together a stunning series of geometric abstract paintings. The second artist is Barbara Schmeisser, a steel sculptor who has put together a series entitled Canada: Regional Reflections, just in time for Canada Day. Her exhibit is comprised of five pieces, one for each region of the country. Both Anna Fiander’s ‘Silhouettes’ and Barbara Schmeisser’s CANADA: Regional Reflections are on until July 14.
One thing I think is so cool about both artists – both women had careers, retired, and then went back to NSCAD for their arts degrees. How great is that?! They are also both proud residents of Dartmouth – we have the coolest community. 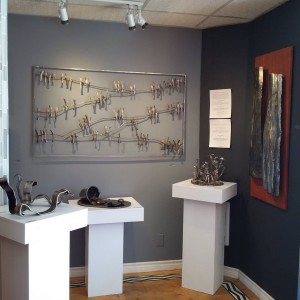 On that note – I’ve been thinking about the recent controversy around the sign at Sullivan’s Pond and the motion to have signs reflect the names of the communities they’re in. I was reminded of Hunter S. Thompson and his 1970 campaign for Sheriff in Aspen, CO; if you’re unfamiliar with it, suffice to say it was a pretty wild campaign – but one of his campaign proposals was to “change the name ‘Aspen’, by public referendum, to ‘Fat City’. This would prevent greedheads, land-grabbers and other human jackals from capitalizing on the name ‘Aspen’.” While it sounds odd, the point, I think, is to remember that when a community is strong, the residents of the community are the only ones who truly dictate what the place is called, no matter what is says legally or anywhere else. We know where we are, and we’re proud of it.
Peace, love, & carrots,
Huxley

The post Dartmouth – we have the coolest community appeared first on Hello Dartmouth.

Dartmouth – we have the coolest community
https://haligonia.ca/dartmouth-we-have-the-coolest-community-108387/