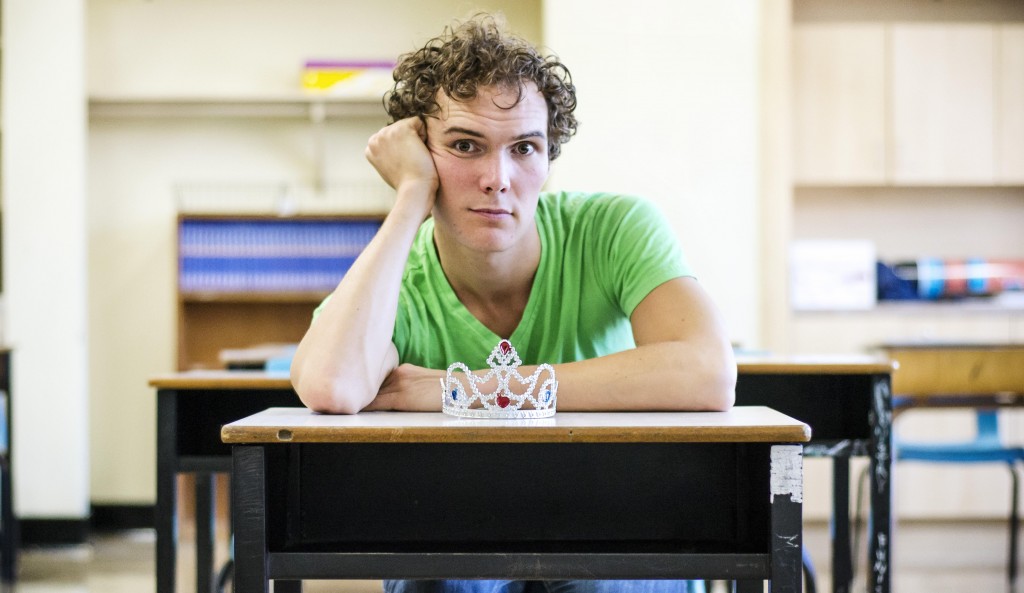 But for the past five years, Halifax Theatre for Young People, HRM’s only full-time, professional theatre for young audiences, has been creating meaningful, engaging theatre experiences for young people and their families. It’s a company that strives for artistic excellence in all production areas, and honours the imaginations of audiences of all ages.

Tessa Mendel, HTYP’s Co-Artistic Director, tells us a little about their latest production David for Queen, a play that uses humour and sensitivity to examine how young people deal with their developing sexuality. It runs October 10-12 & 16-18 at Alderney Landing Theatre.

Tell us a little about David for Queen:

TM: David for Queen is the funny, moving story of a junior high student coming to terms with his sexual identity in an unsupportive world. David seems to have everything going for him; a great girlfriend, a popular best friend, good grades, and run of the school’s news show, but he also has a secret. So when a cruel bully enters him in the race for Prom Queen, he wonders if he shouldn’t stay in the race to prove a point. David has gone far by following the rules, but to be honest with himself and others, he might have to break a few and risk losing those he loves.

The play was written in 1988. What makes it still (or even more) relevant today?

TM: Surprisingly, many of the issues that students face in school remain the same, including the experience of homophobia, and also the expectation of heterosexuality and the suppression of ‘difference’. While the way young people interact and communicate has changed with the advent of social media, the core issues are still relevant today, and the play explores them with sensitivity and humour.

Tell us a little about playwright Kristin Slaney who adapted John Lazarus‘ script for HTYP. What adaptations did she need to make?

TM: Kristin Slaney is an emerging playwright from Halifax who is doing her MFA in Playwriting at Columbia University in New York City.  Her adaptations include incorporating the use of social media and changing the context from senior high school to junior high school, to reflect the fact that young people currently face these issues earlier in their lives. Her adaptation brilliantly captures the way young people communicate and is also faster paced than the original.

Who’s in the cast. What do they bring to their roles?

TM: We are very fortunate to have a wonderful cast of both established and emerging actors, including Christian Murray, Samantha Wilson, James MacLean, Mary Fay Coady and Taylor Olson. They bring so much intelligence, feeling and humour to the play – I’ve honestly never laughed so much in rehearsal.

Why will people want to see this play?

TM:I think people will want to see this play because it deals with an important issue, but not in a didactic or preachy way. It’s funny and entertaining, but also moving and profound. Plus the multi-media aspects of the design help to make it an engaging and artistically interesting experience.

Anything else you think is important…

TM: Although we’re recommending the play for youth 12 years and up, children as young as nine years old have seen it and enjoyed it. There’s nothing offensive or upsetting in it, so it makes it a great introduction to an important issue.

David for Queen plays at Alderney Landing from October 10 – 18. Check out our Facebook event to discover more about our special events including an opening night reception, Pride night with guest panelists, and a Thanksgiving matinee that includes pumpkin pie with the actors!