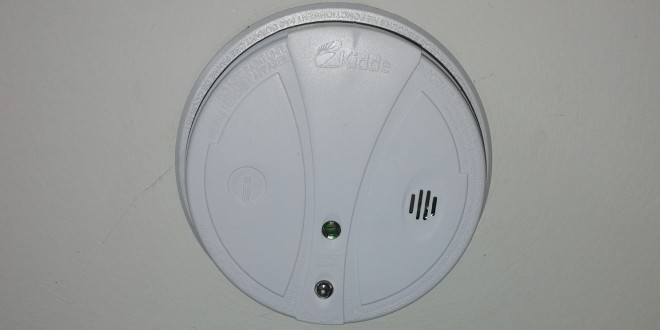 National research shows that the number one cause of home fires is “unattended” stove top cooking; however, this is not the number one cause of home fire deaths. This is because, thankfully, occupants and their noses usually remain awake when they are cooking. They smell the smoke at the earliest stage of a fire and are reminded that they’ve left something on the stove – unattended.

Who, if not your working smoke alarm, is going to smell the smoke from a fire when you are sleeping?

Protecting you, 24/7, working smoke alarms can cut the chance of dying in a home fire nearly in half. They provide the extra critical time you need to escape safely. Don’t stay home without them!

The National Fire Code of Canada (NFC) requires that, at a minimum, you have working smoke alarms installed between each sleeping area and the remainder of your home.

However, this minimum requirement only applies to older homes and is no longer considered adequate protection. Fires today are more dangerous and pose more risks than in the past.
Because of what we know today (resulting from the many tragic and needless fire deaths over the years) codes have changed.

Smoke alarms do not reliably wake adults under the influence of alcohol or drugs.

Smoke alarms do not reliably wake many seniors.

Smoke alarms do not reliably wake persons with a mild to moderate hearing impairment or those who are deaf.

Keeping your bedroom door closed when you are sleeping could mean the difference between life and death in the event of a house fire. Close before You Doze!

Put 1 & 2 together and you’ve got a no brainer – install interconnected smoke alarms in every bedroom, outside each sleeping area, and on every floor, including the basement; and, sleep with your bedroom door closed.

Once you have determined where (which floors and rooms) you are going to be installing your smoke alarms you must now refer to and follow the manufacturer’s instructions to install them.
Manufacturer’s instructions provide essential information specific to the smoke alarm you are installing including how to install (mounting hardware) and where to place. Key details are included such as locations to avoid, distances to heating appliances or kitchens, how to avoid dead air space, distances from obstructions such as ceiling fans or lighting fixtures and where to place in areas with high ceilings or stairwells. These details can all affect the ability of your smoke alarm system to protect you and your family should a fire occur. Smoke alarms  need to be installed properly so they can function as designed.
Following installation be sure to keep the manufacturer’s instructions handy and in a safe location for future reference on your smoke alarms function and maintenance requirements. If you sell your home pass these instructions on to the new home owners – they too will need to know the type of smoke alarms in the home, how to maintain them and what the warning sounds and indicator lights mean.

Wired smoke alarms are wired to and powered from the electricity in your home while battery-operated smoke alarms are not wired to your homes electricity but are powered instead by a battery (usually 9-volt type).
When smoke alarms first became available for homes, the battery-operated type were the most common; however, once the wired in option was developed, they were thought to be safer. This was because they were not dependent on human intervention to maintain batteries and they could be interconnected so that when one smoke alarm sounded they all sounded. The problem was that they provided no protection during a power outage, thus, having both types (wired and battery operated) provided the best protection.
Technology has come a long way though; modern wired smoke alarms have back-up battery protection built right into them and battery-operated smoke alarms can be wirelessly interconnected. Many types even offer a 10-year battery that doesn’t need changing for the life of the smoke alarm.

Do you ever wonder why some smoke alarms go off whenever someone takes a shower, or cooks, even if they’re not burning anything? These alarms are referred to as “nuisance alarms” and are one of the main drivers behind the requirement for the “hush” button built into modern smoke alarms.
In some homes, floor plans are such that it is difficult to place a smoke alarm between each sleeping area and the remainder of the home while at the same time keeping it far enough away from the kitchen or bathroom to avoid nuisance alarms. This is where photoelectric smoke alarms are preferred as they are less susceptible to false alarms. Photoelectric-type alarms respond first to slow smouldering fires. They aim a light source into a sensing chamber at an angle away from the sensor. Smoke enters the chamber, reflecting light onto the light sensor; triggering the alarm.

Ionization smoke alarms on the other hand are generally more responsive to flaming fires. They have a small amount of radioactive material between two electrically charged plates, which ionizes or electrically charges the air molecules causing current to flow between the plates. When smoke enters the chamber, it disrupts the flow of ions, reduces the flow of current and activates the alarm.

Recently, newer technology introduced “smart laser” smoke alarms. Laser detection is similar to photoelectric technology; it works on the same light-scattering principle, but with 100x greater sensitivity. This makes the smart laser smoke alarm much better at distinguishing the difference between a smoke condition in your home and dust, moisture, or small insects thus reducing false alarms even further.

• Devices for Heavy Sleepers and/or Persons with Hearing Impairments

For more information on devices for persons with hearing impairments, please contact our Fire Prevention Division fireprevention@halfiax.ca or by calling 311.

Smoke alarm batteries should be changed as per manufacturer’s instructions, but not less often than at least once a year. A good reminder is to change your smoke alarm batteries when you change the time on your clock.
A “chirping” or “beeping” smoke alarm needs attention. It is an indicator that the smoke alarm may need the battery replaced, need to be cleaned, or, need to be replaced. Some smoke alarms have a ten (10) year non-replaceable battery that extends through the ten (10) year life of the smoke alarm.
Always follow the manufacturer’s instructions when installing, testing, maintaining and replacing your smoke alarms.

What to Do if Your Smoke Alarms Activate:

Stay low under smoke and follow your Fire Escape Plan. Go to your nearest exit as quickly and safely as possible. If conditions allow, close doors behind you and alert others by yelling “fire”.
Once outside call 911 from a safe location using a mobile phone or a neighbour’s phone. Go to your family’s designated “meeting place” so all family members can be accounted for. Do not re-enter the building for any reason. Wait for responding fire crews. If possible, prepare to provide them with any relevant information you may have:

Proceed with caution and investigate the cause of the smoke alarm activations. If you think there is a fire or an un-safe condition leave the building immediately and follow the instructions above.