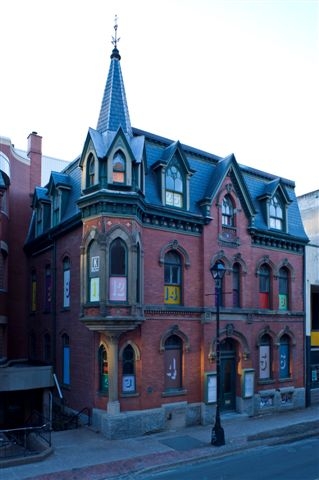 Two public meetings were held last week to decide the fate of the historic Khyber building.

Despite the blizzarding weather on Wednesday evening, the conference room of the Bloomfeild Centre was full with HRM representatives, Khyber Arts Society (KAS) members, and interested community members.

Daniel Joyce is the interim director of the KAS. He wasn’t surprised with the turnout.

“It’s really good for the economy, it livens up the city, having a strong culture helps put a city like Halifax on the map internationally. It’s vital for a city to invest in their culture.” he says. “It was really great to have so many people come out in the middle of a blizzard to show support for the Khyber.”

According to Christine Lavoie from HRM’s Cultural Affairs office, there were about 50 in attendance in all.

The meetings were held to inform the public about possible future strategies for the Barrington St. landmark, the Khyber Building.

A report (http://www.halifax.ca/crca/feasibilityreport.html) commissioned by the HRM and the KAS outlined five possible scenarios for the future ownership and use of the Khyber.

The public was welcomed to learn more about the report, and ask any questions about the building. They are now conducting a survey (https://surveys.gov.ns.ca/TakeSurvey.aspx?SurveyID=8231352)  that allows people to comment on what they think is important for the future of the Khyber.

“It is a civic asset, therefore it does belong to the public – we want to make sure it fits their needs, we need to consult with them,” said Lavoie.

The survey runs until Jan 8. Lavoie hopes to bring the results before council by February or sooner. They will vote to make the final decision.

Joyce says the KAS is hoping for scenario C.

“If we could pick one it would definitely be C,” he said. “We could focus the most on our programming, and make things happen and we wouldn’t have to worry about things like, when pipes burst or taking out the garbage or fixing cracks in the walls – all these things that happen all the time.”

The Khyber Building was built in 1888, and will need extensive repairs and updates to be fully functional.

Deciding the future of the Khyber building
https://haligonia.ca/deciding-the-future-of-the-khyber-building-9718/