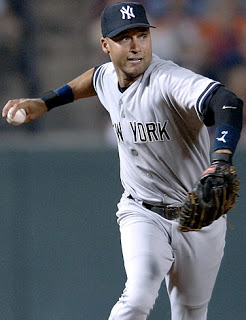 Jeter for MVP?
Before the 2009 Major League Baseball season, many pundits and analysts were saying that Derek Jeter’s days as the shortstop for the New York Yankees could be coming to an end.
There was speculation that he could no longer adequately play his position, that he had lost range, arm strength, and would eventually end up patrolling the outfield at the new Yankee Stadium.
As we head into the stretch drive of the regular season, the same critics are now starting to talk about Jeter as the unanimous selection for American League MVP.
Jeter is having a comparable season to Barry Larkin in 1997. That season the Cincinatti Reds shortstop didn’t have eye popping numbers in any one statistical category, but had great numbers over a wide range of categories.
Jeter is batting .335 with 15 HR’s and 56 RBI’s, 21 Stolen Bases, and an On Base Percentage of .400. He’s fielding the shortstop position with a .987 percentage and has made only 6 errors. Jeter’s stats maybe comprise the best overall package of numbers in baseball.
He’s even made a believer of Bob Ryan, the highly respected Boston sports writer who has covered the Red Sox for over three decades. On the Reporters today (Sunday mornings in TSN; outstanding show), Ryan lobbied for Jeter to be MVP and even said he may be the greatest player of his generation.
Whether or not this was in response to Hall of Famer Jim Rice’s controversial comments about Jeter remains to be seen. It wouldn’t be atypical of a Boston sports writer to challenge comments from the former Red Sox star, Rice and the Boston media always had a contentious relationship.
Regardless, Ryan is bang on. Jeter is putting together one of his greatest seasons. However, without Alex Rodriguez in April, the Yankees were a .500 team. Since AROD’s return, they’re winning nearly every series they play and have built a 7 game lead on the second place BoSox in the AL east.
But as MLB tries to separate itself from the steroid era, it’ll be players like Jeter who receive alot of praise and attention. Any player whose name is attached to the steroid label, will struggle to receive acclaim until they are at least 2-3 years clean.
Other players in the running for AL MVP; Jeter’s teammate, Mark Texeira, Canadian Jason Bay, and Rays outfielder Carl Crawford.
Ortiz Slowly Putting Up Impressive Numbers
Big Papi, David Ortiz, is slowly but surely putting up a statistically impressive season. Is it in the same as the off the chart numbers he put up between 2003 and 2007? No.
But for a guy who is reported to have tested positive for PED’s, did not hit a home run until mid May, and at one point was a hopeless situation for the Sox, Ortiz has become fairly productive at the DH spot.
His .225 average notwithstanding, Ortiz now has 20 Hr’s and over 70 Rbi’s. If he keeps it up, he should finish with 25 and 90. Not bad for a guy who people, including myself, thought would be watching the game from home next season.