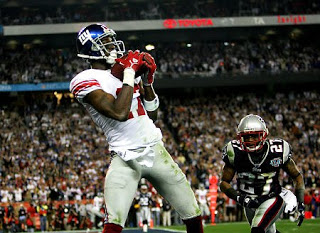 Check out Haligonia Sports tomorrow at Noon on live.haligonia.ca. Our guest will be Steve Sarty, the Director of Athletics at Saint Mary’s University.
Pity Poor Plaxico?
Former Super Bowl Hero Plaxico Burress plead guily to illegal gun possession and his lawyers successfully plea bargained his sentence to a maximum of 2 years in prison. With good behaviour, Burress should be out of prison in 20 months.
It’s been a short 9 months since that Saturday night in November, when Burress made his fateful decision to enter a New York city night club with a loaded gun in his pocket. We’ll never understand why Burress decided to carry that gun, I doubt he could explain why he did it.
Upon hearing the news that Burress accidentally shot himself in the leg, my first thought was ‘Thank god he only shot himself.” It would have been great if the bullet would have just pierced the club’s hardwood floor, but at least it didn’t injure or kill an innocent bystander. Someone who didn’t care about football, let alone Plaxico Burress. Somebody’s husband, daughter, or father. Someone whose life should never have been cut short by a mistakenly fired gun from the pants of a millionaire who had so many other options.
No, the bullet found Plaxico’s leg. And just like the bullet that travelled in one side and out the other, so must be the thoughts now travelling through his head.
I like to think that he’s desperately trying to find some rationale for why he felt he needed to carry a loaded gun that night in New York. Anything that could provide solace, something which he could cling to, as he prepares to have those prison doors slam behind him.
He won’t find it.
He’ll ask himself why he had that gun in his pocket a million times, and he’ll never find an answer that will provide a sense of relief.
Plaxico Burress represents the type of self destruction that exists in all of us. Each one of us, regardless of our place in society, or our amount of wealth and prosperity, is just one horrible decision away from losing it all.
That’s not to say any of us would carry a loaded and unlicensed weapon into the Lower Deck or Pogue Fado. We are Canadians after all.
However, we each have the ability to completely destroy everything we’ve accomplished.
Plaxico Burress is a reminder to all of us to always think twice when making decisions that could carry a heavy penalty.
Burress was a Super Bowl hero. That’s not an understatement. He caught the game winning touchdown in North America’s biggest championship, the winning score in the Giant’s monumental upset of the undefeated New England Patriots. After today, he’s just a 32 year old man off to prison. That’s a tough lesson for a man blessed with extraordinary physical gifts, who had everything one man could ever want.
May we all be so fortunate to live out the remainder of our days free of such a costly and unnecessary lack of judgement.
Ryan Howard is beginning his annual late season emergence as one of the greatest power hitters
in baseball. As usual he’s taking the Phillies for a ride to the playoffs on the way. Philadelphia’s first baseman has shown a knack for heating up at just the right time and this season is proving to be no exception. Howard has 6 Hr’s and 19 Rbi’s in his last 10 games! Not coincidentally, the Phillies are 8-2 in the same span…….Tom Brady took his first hits of the pre –season. Brady took 2 hard knocks from the Cincinatti Bengals in the Pat’s exhibition loss. The Patriots qb was quick to get up after each hit. Brady missed the entire NFL season last year after suffering a knee injury vs KC in the opening game…….Apparently Shaquille O’neal stole the idea for his new reality show from Phoenix Sun’s Point Guard Steve Nash. Nash had mentioned to Shaq his idea for the show when O’neal joined the Suns last season. When Nash found out Shaquille was going to do the show, he contacted a lawyer. The result; Nash is listed as an Executive Producer on the show’s credits…..I’ve always felt that NFL referees should wear black pants…..Just to put the Jay’s season in perspective; since starting the season 27-14, Cito’s boys have gone 28-50….how ridiculous is your country’s pool of hockey talent when Jason Spezza is a late invitee to the national team training camp, and Steve Samkos isn’t invited at all.
Join me Friday at noon for Haligonia Sports. This week our special guest is Steve Sarty, the Director of Athletics at Saint Mary’s University. Check us out on live.haligonia.ca, Friday at noon!