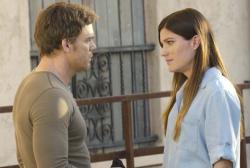 It’s a shame that I watch Dexter immediately after Breaking Bad, as both shows head into their final days. In seasons one through four, Dexter was filled with suspense.

It was never the best show on TV, but it was damn enjoyable. I’d hoped the final season would bring back some of the excitement the show had lost, but I’ve been left in disappointment. This season, particularly in such stark contrast to the genius of Breaking Bad, has been simply something to sit through.

I am mildly invested in whether Dexter, Hannah and Harrison escape to Argentina, but I don’t really care about their happy ending as a family. If the writers wanted us to care more, they should have kept Hannah around and allowed us to develop affection for her character. Or, they should have made Dexter the one attempting to escape the law.

I’ve been most invested in the future of Deb, because I feel that her relationship with Dexter (I’ve blocked out THAT from my memory, though) defines the series. Something must happen to Deb, whether she ends up dead or taking the heat for Dexter’s crimes.

My biggest issue with these final episodes is that Saxon isn’t a compelling enough villain. He was introduced to us too late in the game. Remember what an opponent Trinity was? This kid doesn’t have a fraction of that menace.

Dexter’s decision not to murder Saxon, but to leave him for the justice system, would have been interesting had it not been so stupid. The guy knew WAY too much to be allowed to talk to police. So what if Dexter was leaving forever? Saxon knew enough, and Deb has enough blood on her hands as well, to cause a lot of trouble. It was truly moronic, and totally out of character for Dexter Morgan.

I hate the idea that Dexter’s love for Hannah could be curing him of his psychopathy. It’s letting him off the hook too easily. He was introduced to us as a serial killer, as a monster with a dark passenger, and that’s how he should depart. Dexter’s vigilante code has made him an interesting anti-hero, but I don’t buy the idea that he could just be reformed.

I will, of course, be watching the series finale next week. After eight years, of course I want to know how the story ends. But I’ll probably still be thinking about the episode of Breaking Bad that I watched while it’s on.