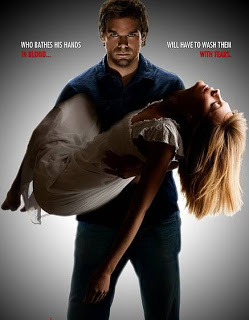 I have to admit, considering the final episode of Dexter‘s fifth season was called “The Big One”, I kind of expected it to be, well, bigger.
Not that I wasn’t completely enthralled in the episode. I’m not a Dexter hater. I’ve been captivated by this season from the start, I’ve been fascinated by the character of Lumen, and I was completely drawn in by the finale. But I can’t be the only one who expected a little something more, right?
I think a lot of people expected Deb to find out the truth about Dexter. And she came pretty damn close. You could even argue that she does know. But it wasn’t the game changing revelation I had been hoping for. Still though, the decision to let the vigilante lovers go was a major development for Deb, and something that will change her character. This season has been a big one for Debra Morgan.
Revenge 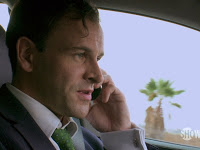 At the beginning of the episode, Dexter had a lot on his plate. Lumen had been taken by Jordan Chase, but she was still alive. The police had found Liddy’s body in the surveillance van where Dexter killed him. And the whole family showed up to surprise Dexter by holding Harrison’s birthday party in Miami after all. It’s hard out there for a part-time vigilante killer, you know. It felt like things had come full circle – at the beginning of the season we saw Dexter struggle to keep all his plates spinning in the wake of Rita’s death. Now at the end of the season, he was still trying to juggle everything. Life doesn’t stop, even when you’re hunting an evil dude who’s got your girlfriend. 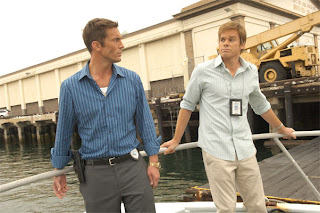 Dex tried to get away from the Liddy crime scene as quickly as possible, but things didn’t go so smoothly for Quinn. Phone records showed that he’d had a relationship with Liddy, and then LaGuerta spotted some blood on his shoe. And then Quinn asked for a lawyer. That sure didn’t help him win back Deb’s trust.
Dexter stole a car and raced off to find Lumen – he correctly surmised that she was being held at the camp where the whole twisted story had begun. The place was now abandoned and owned by Eugene Greer. Lumen was there, being held by Jordan who knew Dexter would come for her. Every single scene between Jordan and Lumen was creepy and terrifying. The way he pretended to bite her or something? What was that? Does Jordan Chase watch True Blood? So. Freakin’. Creepy. Unlike some of the other Big Bads in Dexter‘s history, I feel like we never really got to know Jordan Chase. He remained an enigma, even in his final moments.
Dexter was sloppy. He crashed the stolen car and was immediately grabbed by Jordan Chase. It was looking bad, until Dexter pulled an awesome move and stabbed Jordan in the foot with a knife he’d managed to hold onto. They tied him up and Lumen plunged the final knife into him, straight through his heart. She got her revenge, but she didn’t get answers.
Release
Unlike last season’s finale, the most compelling scene of the episode did not come at the end. It came when Dexter and Lumen were getting ready to clean up the kill room, before they’d had a chance to even move the body. It came when Deb showed up. 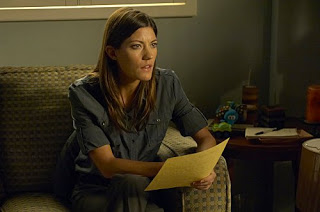 This has been such a fascinating season for Deb. It started when she killed the Santa Muerta guy and didn’t feel any guilt. She’s struggled with her feelings about Quinn. She’s battled with LaGuerta. She’s watched the rape videos from the barrel girls case over and over again, and put together her astonishingly accurate theory about vigilantes in love.

So when Deb came across the vigilantes in love, when she saw the body of Jordan Chase and addressed their silhouettes from the other side of a plastic sheet, she did what had previously been unthinkable. She let them go.
Think about the old Deb. The Debra Morgan from seasons past. Did she sympathize with the Bay Harbor Butcher? I don’t remember her calling Doakes a hero. I can’t picture the old Deb letting two killers go, and even now she was obviously conflicted about it. I can’t wait to see how this will play out next season.
Recovery
One of the more fascinating subplots in the episode was the way LaGuerta supported Deb when it came to tracking down Jordan Chase, and the way she comforted her about Quinn. After spending the season acting like a total B, she’s just another way this season has shown that nothing in the world is black or white.
Meanwhile, Dex and Lumen took Deb’s advice and cleaned up the murder scene before the police arrived. Lumen looked joyful and at peace as they returned from dumping Chase’s body in the harbor, and I wasn’t sure how things would wrap up. Would she stick around? Would she jump into the ocean and get creamed by the boat? The one thing I didn’t really expect was that she would just plain leave.
There was no fanfare or drama. She just told Dexter that when they dropped Jordan Chase’s body, she felt something change. The darkness had left her and she needed to leave. Dexter was devastated. This is the second love he’s lost in a very short time, albeit entirely different kinds of love lost in entirely different kinds of ways. Did you see this one coming? I did, and I didn’t. I expected Lumen to leave, but I also expect the unexpected from Dexter. So really, I was surprised by the fact that Lumen’s exit was so entirely ordinary. Did the writers know the viewers would expect a big finish and purposely give us an understated one? Now I’m starting to sound like a rambling lunatic, so I’ll stop. I hope you get my drift.
Dexter responded to Lumen’s news with anger, but mostly grief. He understood why she had to leave, he was even a little happy for her. But that didn’t make him any less heartbroken.
In other news, Dexter rigged the blood results from Liddy’s murder to clear Quinn’s name. We knew he would, he had to do it for Deb. If he didn’t know how much Deb cares about Quinn, I’m sure Dexter would have been more than happy to frame another pesky cop. But now this means that there is some incredible tension between Quinn and Dexter. Of course Quinn knows Dexter was involved. The question is, how much does Deb know? 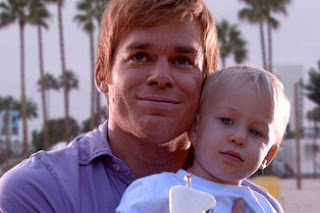 So we’ve come to the end of what I’d consider to be a very character-driven season. Personally, I liked it. It didn’t have the terrifying suspense of last season’s Trinity storyline, but I don’t think that can ever be topped. This season was more subtle, more character-based, and it sort of feels like the preamble to a final season. Dexter has gone through a transformation, and so has Deb. All that’s left is for her to find out. Do you think the sixth season will be the last?