Home / Life / Couchtime With Jill / How I Met Your Mother: My Favorite Things 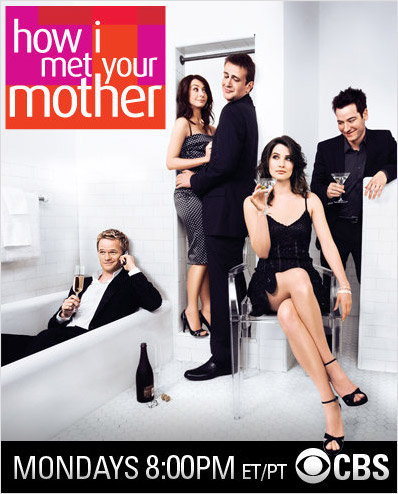 How I Met Your Mother: My Favorite Things 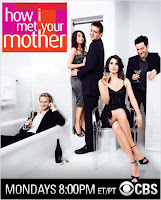 I’ve got to hand it to How I Met Your Mother, they went out with a bang. I’ve been running hot and cold on this episode – some weeks I love it, other weeks it totally falls flat. But “False Positive” was perfect.
What I liked about this episode was that it reminded me of another great episode from this season, “Subway Wars” when the whole gang raced across New York to see who had the quickest mode of transportation. What’s great about these episodes is that they take one specific event or idea (like racing across town, or Lily and Marshall getting pregnant) and show how it influences each character. HIMYM is best when everyone is interacting, and episodes like this let us have that while also letting each character have his or her own life and issues.
Bringing Up Baby 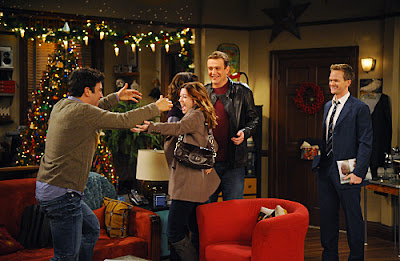 As you could probably tell from the title, this episode centered around Marshall and Lily having a pregnancy scare. I know, I know, it’s not a scare if you’re actually trying to get pregnant. But Marshall and Lily both freaked out so much at the thought of actually having a child (I loved that they bubble wrapped an iPod to her stomach) that they were actually relieved when they found out it was a false alarm.
Before they found that out, though, the news that a baby would be infiltrating the gang affected everyone in different ways…
Check yourself before you Trebek yourself 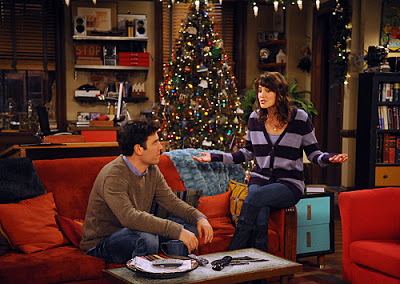 Both Robin and Barney had hilarious subplots that were also spoofs on actual things in pop culture. Robin was trying to make a decision between two jobs – an off-camera research job at a respectable news organization, or a coin-flipping bimbo on the hit show “Million Dollar Coin Toss”. It was an obvious spoof of Deal or No Deal, complete with a Canadian host – this one was Alex Trebek, though.
What was so great about Robin’s storyline was that it is the first one she’s had in a while that actually suits her. Yeah, Robin wants to be a real journalist. But she also wants to be famous, so I can see her struggling with the decision. And after the rough career path she’s had (a failed move to Japan, passing up a good opportunity only to have Don take it, Becky) I can see her choosing to become a slutty coin tosser.
Everyone’s getting a lap dance! 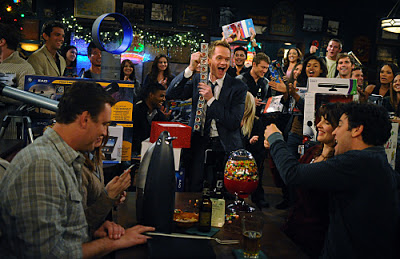 Meanwhile, Barney responded to Lily and Marshall’s news by yelling “I’ve never seen that woman before in my life” (force of habit) and then by reevaluating the way he was going to spend his gigantic Christmas bonus. He’d planned on spending it on a diamond-striped suit. Instead, he decided to give the money to charity…sort of.
Barney’s spoof of Oprah’s Favorite Things was, in a word, spectacular. Both the writers and Neil Patrick Harris nailed it. The reactionary shots of the audience. The tone of Barney’s voice. The final declaration of “We’re going to….ahhh…str….ipclub!!!!” that sounded just enough like “Australia” to be completely hilarious, followed by “You’re getting a lap dance! You’re getting a lap dance! Every! Body! Is Getting! A! Lapdaaaaaaance!”
Snap Out of It
This episode was also Ted’s best all season. (And no appearance from Zoey. A coincidence? I don’t think so.) The Ted in this episode is the Ted I know and love. Kind. Honest. Slightly douchey, but in a totally lovable way. Everything from the way he told Punchy he was going to crush the floral arrangements for the wedding to the way he was the only person not freaking out about Lily and Marshall having a baby was totally spot on.
When Barney and Robin found out that Lily wasn’t really pregnant, they reneged on their previous declarations – Robin decided to take the job as a coin-flipper after all, and Barney showed up for a showing of “It’s a Wonderful Life” in the sparkly diamond suit. But Ted really lost it when Marshall and Lily showed up and rather than being disappointed, they talked about getting a dog instead.
I can often see where jokes are going, but I did not expect Ted to smash his “Christmas-themed move snack” of a full gingerbread house in a fit of rage. That was worth watching a couple extra times. As he delivered a biblical-tinged rant to Marshall and Lily demanding that they go home and make a baby, and outed Barney’s expensive clothing to the criminals of New York, and gave Robin a stern talking-to about her future, it all felt very right. Ted is the center of the show because he’s the stable, normal one.
Christmas Miracle
The episode finished with the perfect amount of sappiness, especially because it was a Christmas episode. (They did a Christmas episode and it wasn’t gimmicky – take note, other showrunners.) Robin took the real news job, got the ID badge she’d pledged she’d get, and looked like crap on it. Classic. (I was particularly proud to get my first ever journalist ID badge once upon a time, and I looked like a serial killer on it. I’m surprised they let me into the conference, since there were actually important international dignitaries there. I still have it.)
Barney returned the diamond suit, donated loads of money to his brother’s father’s church, and donated a bunch of suits to the church’s charity as well. And Lily and Marshall realized how silly they’d been, freaking out over having a baby.
The episode ended with a sweet moment when Robin asked Ted to one day be her best man…so does that mean Ted meets The Mother at Robin’s wedding, not Punchy’s? If anything, this episode showed that Ted is definitely ready to meet The Mother. The episode was also chock-full of hilarious lines and moments, so check out some of my favorites: