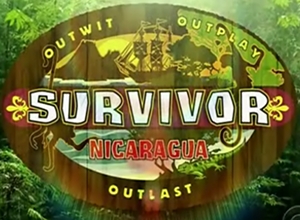 Now that’s what I call an episode of Survivor. After what’s been one of the weakest Survivor seasons of all time, it was nice to see some of these losers actually wake up and start playing the game.
Personally, I was absolutely praying that Fabio would win immunity. I love when the underdog wins immunity and screws up the power alliance’s plans, and that’s exactly what happened last night. The core alliance – Jane, Holly, Chase and Sash – had planned to vote out Fabio, but couldn’t. So instead they had to face the cold, hard truth that it was time to vote out Jane.
If you’ve been reading this blog, you might know that I have not exactly been rooting for Jane. I don’t like her. I find her annoying. To each his own, you know? And her reaction to getting voted out – a mixture of entitlement and vindictiveness – was a prime example of why that is. Did she even bother to work on getting Dan or Fabio to side with her? It appeared as though instead of strategizing, she threw a tantrum. But I’m getting ahead of myself here.
Mama’s Boys
Wednesday night’s episode brought us the seasonal sap-fest that is family visits. Oh, the family visit. I’ve never been a huge fan. Unless someone shows up and announces “Dude, your grandmother died”, my interest is limited. Too much crying for my taste. It can drag up some nice drama, though, and this year’s family visit was no different.
Chase, Sash and Fabio are all little mama’s boys and before the challenge Chase pledged that if/when he won (that guy is a machine!) he’d bring Sash and Chase on the reward with him. So all the family members were trotted out – Chase, Sash and Fabio’s mamas, Holly’s husband, Dan’s son and Jane’s surprisingly young daughter – to participate in a two-part challenge. The actual players had to retrieve bags of puzzle pieces from a pool, and then the family members had to solve the puzzle. Or if you’re Jane’s daughter, your mother whispers “Family First” to you and you still don’t solve it. 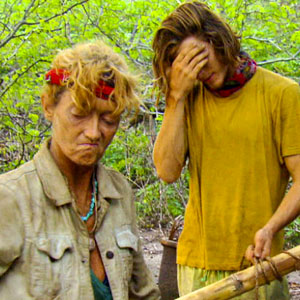 Chase’s mom killed the puzzle and he chose Sash and…Holly to accompany them on the reward. Um, for reals? Chase! Why do you keep making these ridiculous promises only to break them? Just stop telling people you’ll take them on the reward! Dan’s son called Chase a scumbag because he’s awesome, and Fabio cried because he, like, never gets to see his mom, dude. I’m not sure when Survivor family visits became about who spends the least amount of time with their family members outside of the game, but that seemed to be the theme. Jane mentioned that she’d missed out on her daughter’s last summer at home to do Survivor, apparently as a reason why she should have been chosen. Really, Jane? You abandon your 18-year-old daughter for her last summer at home shortly after the death of her father and I’m supposed to…respect you? Feel bad for you? Declare that you should be rewarded? I’m not saying Jane shouldn’t have come. I’m just saying that it’s not a decision that makes her extra-deserving of the reward, or of the million dollars.
The best part of the entire challenge was Fabio’s mom telling him “Get your head in the game. We’ll have plenty of time when you get back.” Yes! Can we get Mama Fabio on a future season, please? It was the Survivor family visit version of slapping him and saying “Snap out of it!”
Blind, not Dumb
After what felt like a very long commercial for some sort of cell phone, Chase returned to camp with Holly and Sash to face Fabio’s tearful wrath. I’d say Fabio went a little over the top with the mom stuff, but dude did promise to take him and deserved to be called out on that.
The immunity challenge was a good one – each player had to go through a small obstacle course blindfolded, memorize a shield, and then go back and put the shield together. The look on Dan’s face when Probst said they’d be blindfolded was hilarious. It was as though sight was the last thing he had going for him. Oh wait…it is.
It was close, but Fabio managed to pull out the win – and he knew he needed it too. That threw a huge wrench into Sash, Holly and Chase’s plans, which meant lots of fun discussions back at camp.
Not so Sweet Carolina
Fabio might be playing dumb, but Chase actually is. The guy was so unwilling to part with Jane, even though everyone has been saying for weeks that they would have to. His idea to take Jane to the final four was absolutely idiotic. The last challenge is almost always an endurance challenge, and she easily could have won her way into the finals. And then she easily could have flat-out won. What chance does Dan have of winning even a challenge, let alone the game?
Sash and Holly are using their heads though, and they knew with Fabio off the chopping block it was time to vote out Jane. And thus began the most awkward conversation ever – Jane asked if she was being voted out instead of Dan, and slowly everyone admitted that it was a strong possibility.
So what did Jane do? She threw a fit. My mom thinks she’ll be this season’s Sue Hawk, and I don’t disagree. I can totally see Jane delivering an angry speech on Sunday night. It’s one thing to feel betrayed by your alliance. It’s another thing to act as though you are entitled to the million bucks, and that’s how I think Jane acted. So you got screwed over by your alliance? Try and form a new one. Did Jane try that? Did she approach other people and offer then a better plan? Did she try and tell Fabio “You’ll be fourth of fifth with them, but you’ll come in second with me”? No. Instead she took two huge buckets of water and put out the campfire before leaving for Tribal Council. (Loved the look on Fabio’s face when that happened.) And she said “If I was Chase, I wouldn’t try t shove my ass back into North Carolina.” Classy. 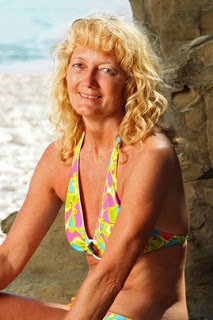 Tribal Council was lively because Jane went out kicking and screaming. Not that she went out with a fight – if anything, Probst was the one who suggested that Fabio and Dan join with her to vote out Holly. No, Jane just went out with a tantrum. She called some people out on some stuff (Holly and the shoes) and whined that everyone was a liar. (She did her fair share of dirty work too, betraying both Marty and Brenda.) Chase completely bungled things up too, essentially telling Fabio he’ll be the next to go and putting Sash and Holly on the spot to agree to it. It was bad. It was even worse than Probst’s impression of his own mother, which was just hilarious.
In the end Sash and Chase both played their idols, as it was the last night to do so, and everyone voted for Jane. Jane voted for Sash (or was it Chase? either way it was stupid), which made absolutely no sense.
So we’re down to five. I do not want to see Dan win. I do not want to see Chase win. I’d prefer to see Fabio win, I guess, or Sash because it would mean my sister wins the Survivor pool. I feel pretty neutral about Holly – she started off weird and pathetic, and took a long time to find her game. Really, there is no winner who can redeem this season. It’s a dud no matter what. Who are you rooting for?