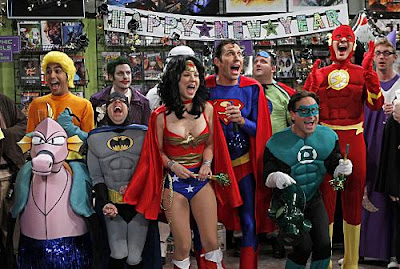 The Big Bang Theory went out with a bang, right? Last night’s holiday themed episode (the gang was celebrating New Year’s Eve) knocked it out of the park – there was lots of fun interaction between Penny and the gang, plus the added bonus of having a fresh character around.
Zach really made this episode for me. He’s dumb, he’s sweet, and he made our typical underdogs look like a bunch of jerks. It freshened up the show and delivered a lot of funny material.
Not only did Zach want to visit the comic book store with Leonard, Sheldon, Raj and Howard, but he agreed to go there on New Year’s Eve, too. The comic book store had an annual costume contest that night, and with an actually muscular Superman they had a shot at winning “Best Group Costume” as the Justice League.
Although the episode was more jokes than plot, there was some actual character development – Leonard has realized that Penny still has feelings for him, which means we’ll have some interesting material to look forward to in 2011. I know a lot of people will disagree, but I’d like to see Penny and Leonard back together.
After some Penny drama that I won’t detail, the whole gang did end up winning the “Best Group Costume” prize, and the look on Sheldon’s face was awesome. You know what else was awesome? All these quotes and moments from the episode: